Home Business & Finance A sign of compassion in Monaco 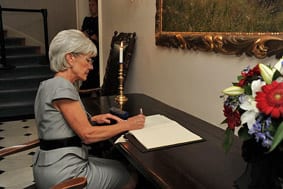 Monaco residents are invited to sign a Book of Condolences at the French embassy in Monaco for the victims of last Thursday’s bloodbath in Nice.

The book was first opened in January, 2015, just after the attack on Charlie Hebdo in Paris. There is a gap before visitors comment on the Paris attacks of November 13 last year, and there is a merciful gap before the outpouring of sadness, anger and solidarity restarts on July 15, the day after the Bastille Day tragedy in Nice.

One of the first to sign was Danielle Merlino, the president of the Federation of French groups in Monaco. “Horrified by the attack in Nice, we offer our condolences to the families in their grief. Together, France is strong.”

Comments follow in French, English and Italian. Monegasque Jean-Claude Michel, president of the members of the Legion of Honour of Monaco, wrote: “Words are not enough to describe the tragedy that cruelly engulfed the city of Nice, the world. Vive la France.”

The book is open until the end of the month, when the embassy closes for August.