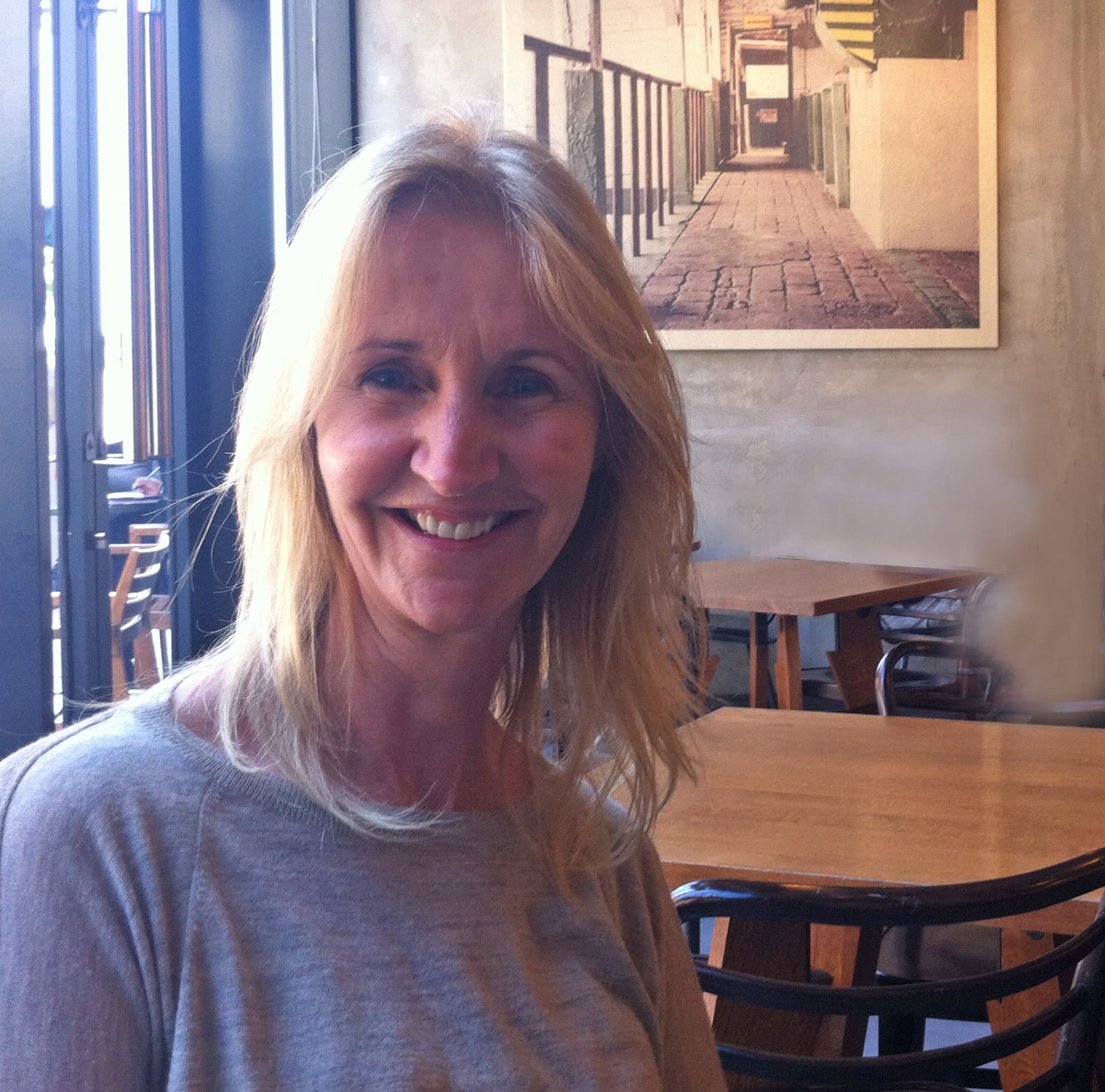 Starbucks is not the kind of place you’d expect to find Sonia Irvine, head of the multi-million dollar Amber Lounge, Formula One’s most exclusive party for racers, supermodels and A-Listers, like Jennifer Lawrence. Dressed in flowing cottons, she sips her decaf, briefly glancing apologetically at her phone that dings as often as the barista calls out the name of the next order (Sonia’s cup is nameless).

“We didn’t have a lot of money growing up,” the single mother of two from Newtownards in Northern Ireland tells me. “Our clothes came from Oxfam. One Christmas Eddie would have a good Christmas and the next year, I’d have a good one, but my parents could never afford for both of us to have a really good Christmas. It taught us to respect money, and my brother and I never waste money.”

Sonia and her younger brother Edmund “Eddie” Irvine, Jr., a Formula One driver from 1993 to 2002, have come a long way since the days of Santa’s visits, but they have kept their feet planted on the ground and kept family close by.

“We had an amazing childhood, we were happy. Mom was always a bit eccentric in a lovely way. She just let us live, there were no constraints. We wanted to learn how to paint. She found gloss paint in the back of the shed, we painted everything – including ourselves – which was impossible to get off.”

Sports always played a part in the siblings’ upbringing. They both competed in swimming at the national level, Sonia from the age of 12 until she went to university, although she admits that “I hated swimming in the end, getting out of the water and being sick because you trained so hard.” These days Sonia rarely uses the pool at her house.

Sonia agrees that the training had a massive impact on her, and her brother.

“Eddie and I are, right or wrong, quite direct. When we don’t like something, we’ll say it, but we go and get things. We both started with nothing. When Michael Schumacher would get equipment, Eddie understood that he was the best in the world. ‘There’s Michael Schumacher and then the rest of us.’ That was his psychology. And I guess that’s why we are both able to turn things around.”

Sonia became a physiotherapist and had her own private practice in Ireland treating sports injuries, where she would work before and after going “to my NHS day job”, where she ran a physio department for stroke and Alzheimer patients. “I loved elderly care and gerontology. Nothing is as satisfying as getting a stroke patient to stand or take a step for the first time.”

In 1996, Eddie was racing for Ferrari and, as the story has been told many times before, asked Sonia to be his personal physiotherapist. She wound up working for the whole Ferrari team.

“This was a total different world. It was quite intimidating; my brother didn’t really introduce me or help me fit in. I just got on with it – I suppose I used my Irish ways. I learned so much but it wasn’t enough for me being a physio, there was a lot of just sitting around all the time.”

When Eddie left to join Jaguar in 2000, Sonia stayed in the F1 world, “working for a sponsorship agency that serviced all the teams along the paddock”.

“As my parents taught me, you’ve got to make the best of what you’ve got, there’s no point in moping. You are in control of your own life and no one owes you anything.” So in 2002, she launched Amber Lounge – the word Amber was randomly picked from a dictionary – which was never a long-term plan. It was only three years after Sonia first put on the now-legendary pop-up Formula One after-party in Monaco that she considered expanding the hospitality venture within the F1 circuit. “I never see a reason not to do anything. If I want to do it, I do it,” she maintains. Today, in addition to the signature Monaco Grand Prix, Amber Lounge is at the Singapore, Mexico City and Abu Dhabi Grand Prix races.

The Amber Lounge team is made up of 12 to 14 people, and there are hundreds of others involved on the events side. “My work in principle is don’t come to me with a problem, I’m not interested. Come to me with a problem and a solution, tell me what you can do.” What’s it like to have Sonia as a boss? “I think very determined, very hard but fair, and I push everyone,” the soft-spoken blond reflects. “If people give me 100%, I’ll give them 150% back.”

Sonia balances her intense workload with her family life. It’s not difficult to be a single mom, she remarks bluntly. She doesn’t have a nanny to help with her 6 and 14 year old girls, she’s involved in the school runs and homework. “I want to spend as much time as possible with my kids. I’m at home for dinner and on the weekends, this is my choice.”

Currently her schedule is a little more stretched than usual as, for the first time in its 14-year history, Amber Lounge will morph into the “Amber Summer” the week following Monaco Grand Prix weekend. “I’ve been wanting to do this for a few years,” she explains, “and all the pieces fell into place, so it was time. I’m very excited to be doing something new.”

Open daily from 5pm, Amber Summer will take over 350sqm at the Meridien Beach Plaza serving an Asian-style night menu, a late night menu and, for revellers, breakfast from 5am to 7am. Unlike Amber Lounge and its wild nightlife though, Amber Summer is a place to relax: “You can come in your beachwear and have a casual drink, or bite to eat before heading out at midnight to the clubs and then come back to Amber Summer for breakfast.”

Meanwhile, this year’s Amber Lounge charity fashion show, which supports a different organisation nearly every year, is celebrating its 10th anniversary on Friday May 27. This edition it has chosen the Amber Foundation (a coincidental name and unrelated to Amber Lounge), which helps disadvantaged street kids, and was suggested to Sonia by her friend Eddie Jordan, the Irishman behind the Jordan Grand Prix.

“On Friday the fashion show will have nine of the drivers – including Daniel Ricciardo and Daniil Kvyat from Red Bull, Marcus Ericsson and Felipe Nasr from Sauber and Nico Hülkenberg from Sahara Force India, Esteban Gutierrez, Rio Haryanto, Pascal Wehrlein and Jolyon Palmer from Renault. The teams are incredible for giving their time. They are super busy and I’m super lucky.”

Over the last decade, the Friday night Fashion and charity auctions have raised more than €4 million in donations for organisations such as the Special Olympics, the Elton John AIDS Foundation and the Nelson Mandela Children’s Fund. “This year, we will have some fabulous auctions lots including a unique piece designed by Yanush Gioelli, a Private Pilot’s license at White Waltham Airfield and a lunch with one of the actors of Game of Thrones.”

Saturday night, there’s an Extravaganza with different acts, including Jasmine “Sun Goes Down” Thompson, who will open the fashion show on Friday.

Each night there’s a three-course sit-down dinner for 250 people, wine and champagne included. Individual tickets for the legendary after-party start at €350, while a VIP table for 8 people (all you can drink) will set you back €8,950.

“I want people to walk away from Amber Lounge and say ‘That was the best experience I’ve ever had and I have to come back next year’. If they don’t walk away happy, I take it very personally.” By Nancy Heslin

Henry has “total support” of AS Monaco...

Local News Staff Writer - November 26, 2018
The owner of AS Monaco, Dimitri Rybolovlev, has given his total support to Thierry Henry, after the manager secured his only win so far since taking over as boss.

Business & Finance Stephanie Horsman - June 23, 2020
The overall economic performance of Monaco was down significantly in the first quarter of this year as the Principality grappled with the effects of the Covid-19 crisis. The only sectors to buck the trend were finance, real estate and construction.