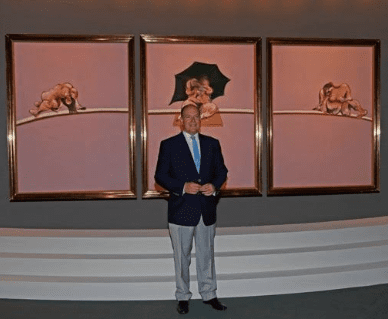 On Friday, the day before the official public opening, HSH Prince Albert II was among the first to experience the interactive Francis Bacon exhibition, ‘leaving his photo-testimony’ in the artist’s virtual studio.

Running until September 4, Francis Bacon, Monaco and French Culture promises to be one of the most successful summer shows ever held. The exhibition comprises 64 works from 1921 through 1991, including his last painting Study of a Bull, and is curated by the pre-eminent Martin Harrison, author of the extraordinary five-volume Francis Bacon Catalogue Raisonné.

The first recorded visit of Bacon to Monaco was in 1940 and the artist later lived in the Principality for four years from 1946. It’s often cited that Monaco was a good fit for Bacon, an asthma sufferer who wanted to be by the sea and an addicted gambler for whom the roulette table was an extension of his risk in art.

Without any formal art education or link to art despite his wealthy Irish family’s connections, Bacon gravitated towards modern art, and at the age of 17, after seeing a Picasso exhibition in Paris, he declared: “I might like to be a painter.”

It was in Monaco that he started painting the human form, seen as “a crucial step that would lead him later in his career to become one of the most influential figurative artists of the post-war era,” said Majid Boustany, founder of the Francis Bacon MB Art Foundation Monaco, although none of Bacon’s work can be confirmed to have been painted during his time here. During the first twenty years of his career Bacon destroyed twenty canvases.

The Francis Bacon MB Art Foundation, based in Monaco, was founded on October 28, 2014 (Bacon’s birthday) and is a private non-profit institute dedicating its scholarly activities and research to the artist. Francis Bacon, Monaco and French Culture will travel in the autumn to the Guggenheim Museum in Bilbao, Spain.

Open daily from 10:00 to 20:00, Thursdays until 22:00, at Espace Ravel, tickets are €10 or joint ticket €16 with European Art Fair Monaco (July 20-24). This exposition will be more informative with a guide. Visitors can download the free Grimaldi Forum app, which provides the option to download an audio guide of the exhibit in English or French for €2.99. 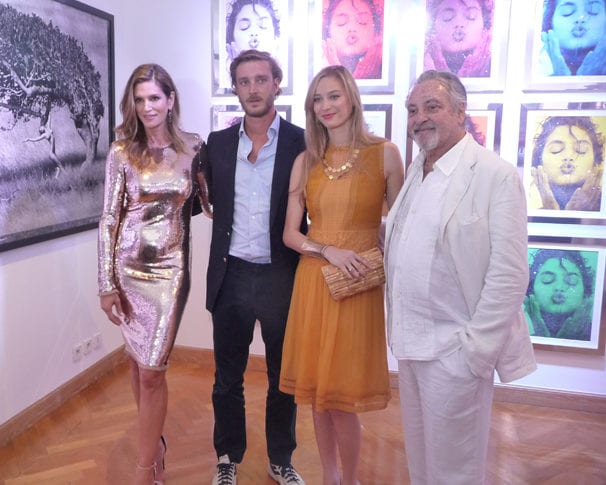 Cindy Crawford with Pierre Casiraghi, his wife Beatrice Borromeo and photographer Marco Glaviano at the Monaco Modern Art Gallery Monday night.[/caption] Celebrated fashion and jazz photographer Marco Glaviano launched his exhibition and book “Glaviano 50” with Cindy Crawford Monday evening at the Monaco Modern Art Gallery. A decked-out crowd, which included Pierre Casiraghi, son of HSH Princess Caroline, and his stunning wife Beatrice Borromeo, sipped champagne outside the gallery between the parked Lamborghinis and the black and white shots of Cindy Crawford that adorned the window fronts. Ms Crawford, divine in a spectacular bronze sequinned dress (“I didn’t realise how warm it was here”), was incredibly gracious with her time, posing with an endless queue of attendees wanting a selfie with one of the world’s most beautiful women. She even indulged the Editor of Monaco Life, a Canadian, in a conversation about the Muskokas in Ontario, where the supermodel owns a cottage and vacations with her family every summer. The 50-year retrospective of Mr Glaviano, who worked with the late John Casablancas and Patrick Demarchelier to jumpstart the careers of models like Cindy Crawford, runs until October 2 before heading to St Barth in January 2017, and includes 25 black and white images and two collectors portfolio each with a set of 12 images, the Cindy Kiss photographs on paper with diamond dust crystal (€15,000) and The Supermodels (€20,000). The Italian artists is celebrating this landmark in his career with “Glaviano 50”, a 30 x40 cm collector’s book art edition covering 5 decades of his career, said to be his final. The 362-page clothbound limited edition book, which includes never before seen photographs, has been printed with four different covers, each with only 50 numbered copies published, and priced at €3,000. The opening was organised by Nathalie Clifford of Space SBH. Monaco Modern Art Gallery is open Monday to Friday, 10 am to 6:30 pm. 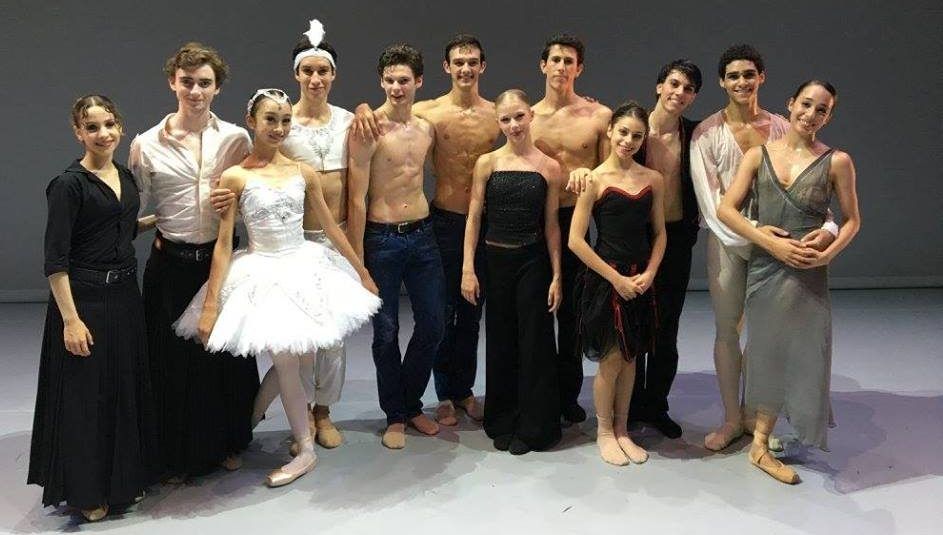 Photo: Facebook Academie de Danse Princesse Grace[/caption] As every year, the Princess Grace Dance Academy Gala is an opportunity to admire the exceptional level of students and the quality of the courses offered. Excellence and diversity are the hallmarks of the Academy whose goal is to train future generations of dancers, teaching them both demanding and multiple learning. and allow each of the students to join an international dance company. For the 2018 edition, the Academy Gala will be held in two stages on June 23 and 24, starting at 8 pm. Graduating students will offer a first part entitled "No farewells" and perform a series of high-flying variations that prefigure their entry into the professional world, which will also provide an opportunity to greet and thank the Monaco public who saw the students grow and evolve year after year. The second part of the Gala will invite the public to discover a series of pieces created for the students of the Brahms Academy of Hungarian Dance. These twenty-one famous dances, whose music evolves between the Gypsy universe and romanticism, enables choreographers to offer different styles ranging from classical to contemporary through the character. Among the choreographers invited to create for these young dancers will be Jean-Christophe Maillot, Michel Rahn, Eugenio Buratti, Francesco Nappa, Sara Lourenco, Grigory Chicherin, Jeroen Verbruggen and also a composition of YoungSeo Ko, a student of the Academy. The graduating students from the 2017/2018 season and the companies they will be joining next year are as follows: Youngseo Ko (Korean) Norwegian National Ballet in Oslo; Yuka Matsumoto (Japanese) Berlin Staatsballett; Natatia Warzabluk (American) Ballett Zürich; Ivana Bueno Garces (Mexican/American) English National Ballet in London; Yuria Isaka (Japanese) Berlin Staatsballett; Min-Ji Nam, (Korean) Stuttgart Staatsballet; Martino Semenzato (Italian) Stuttgart Staatsballet; and 1st at Prix de Lausanne Shale Wagman (Canadian) English National Ballet, London.