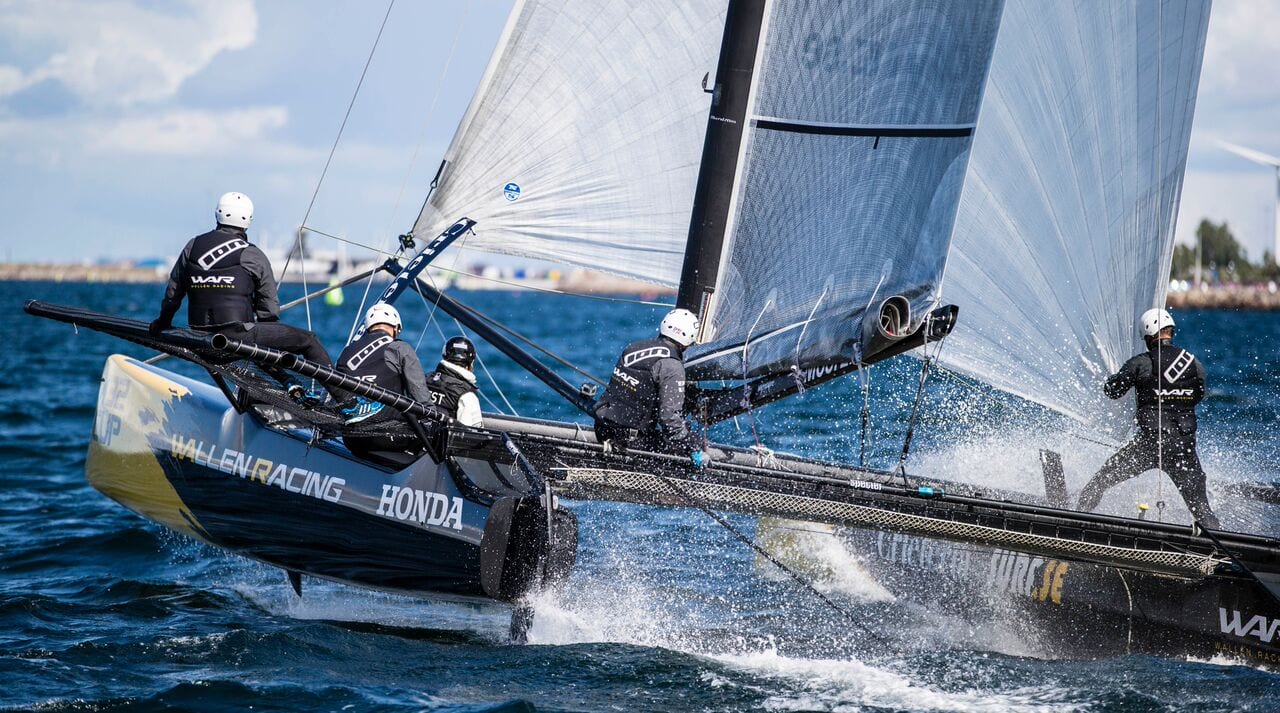 As part of the newly launched M32 Mediterranean Sailing Series 2016, residents and visitors to Monaco can watch Swedish-built 9.68m one-design carbon catamarans race Saturday and Sunday from 11am.

Initiated in 2013, the M32 Series regatta format takes a professional sailing series to the regional level, “to focus on the spectators in the race village”, with back to back short races of 8-12 minutes over 3-4 hours of very intensive racing.

With a crew of four or five, eight teams – including from Italy, France, Spain, Scandinavia and the US – will participate in this weekend’s five-stage “high speed America’s Cup-style fleet” race, hosted by the Monaco Yacht Club. MYC member Guido Miani will be competing.

The series will continue in Riva Del Garda and Crotone in Italy, with the finals in Spain in October.

After losing two in a row, Roca Team got their mojo back and won a decisive 82-65 victory over Germany’s Ratiopharm Ulm at the Salle Gaston Médecin.

After a rocky first half start which saw the Roca Boys head into the locker rooms behind their German opponents at the break, they came back in the second half with fire in their bellies.

An early slam dunk by Wilfred Yeguete, followed by a quick succession of baskets forced Ulm to call a timeout to stop the haemorrhaging. Ulm countered with some impressive ball handling, notably by American Killian Hayes, who scored 15 points on the night, but it wasn’t enough to stop the offensive onslaught.

Anthony Clemmons made a fantastic shot behind the arc, and due to a bit of rough play by opponent Dee Bost, he was sent to the free throw line, where he converted the shots to points. The points just kept coming after that, and when the buzzer went, Roca Team had their win.

"Our confidence was affected by our previous two games,” said As Monaco’s coach, Sasa Obradovic. “We were not precise in the systems and we did not communicate enough. It was in the fourth quarter that we played as we should, with a big defence at the base. Now we are already focused on the next game."

As Monaco Basket’s next challenge will be Saturday, when they face Strasbourg in the Jeep Elite at home. 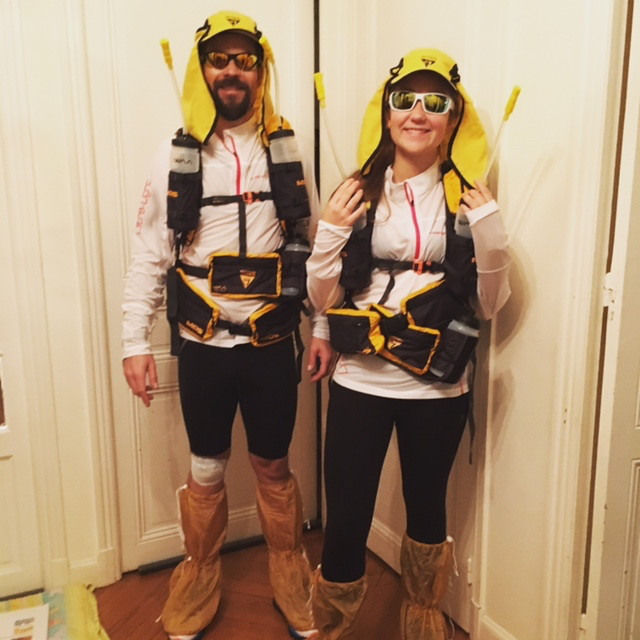 Ben Rolfe and daughter Emily, 16, are running the 250-km Marathon des Sables to raise money for Diabetes UK[/caption] As Monaco Life reported earlier this year, Ben Rolfe and his eldest daughter, Emily, 16, will be running 250 kilometres across the Sahara Desert, from April 7 to 17, for the Marathon des Sables. The dad-and-daughter duo are taking on “The Toughest Footrace in the World” to raise more money for Diabetes UK. When the Rolfe’s middle daughter, Alice, was diagnosed with Type 1 Diabetes in December 2013, it was Diabetes UK that became the family’s only source of advice and support. On Thursday, March 30, Ben and Sally Rolfe are hosting a Curry Night Fundraiser at St Paul's Library (22 avenue Grande Bretagne) from 7 to 9 pm. Space is limited, so booking is essential (email: sallyrolfe@live.co.uk), with a suggested donation of €20 per person. All proceeds going support Ben and Emily’s campaign for Diabetes UK. During the evening, Mr Rolfe, who’s very grateful to St Paul’s Monte Carlo, will give a short talk about the Marathon Des Sables race itself. Monaco Life caught up with Mr Rolfe to talk about training and tapering for the 250 km race across the Sahara Desert. “The fabled Marathon Des Sables is split into stages, every day a different length, and we'll join the other 1,200 runners trying to run to the next bivouac every day,” Ben said. “No showers, no loos, no change of clothes. We'll be sleeping in Berber tents – essentially just a rug on a pole, and the organisers will give us water. Other than that we have to carry everything we need for the week. 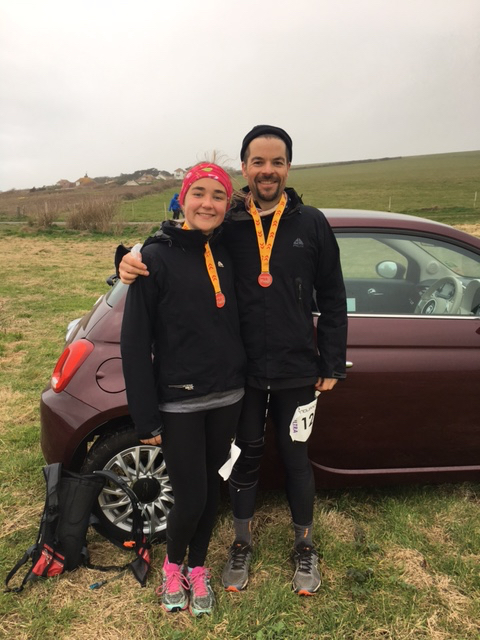 “Having successfully completed a hilly 55km Ultra Marathon last weekend, Emily and I are now tapering, with purely maintenance runs of 5 km and 10 km to keep everything ticking over. Anyone who has participated in an endurance event will be aware of the concept of tapering. When training for a race, there’s little point in putting in heavy mileage in the two or three weeks prior, so that you can go into the event fully rested and the body has recovered from the heavy workload in training. “We are also fine-tuning our kit. Last weekend we repackaged all of our dried foods into vacuum-sealed packs to reduce the bulk and weight. Everything is about weight – even our toothbrushes have the handles cut off to save weight. Any unnecessary straps, labels, packaging, has all been jettisoned.” In just over a week’s time, Ben and Emily will start their journey from Monaco to the desert with a flight to Paris, then another to Ouarzarzate, Morocco, followed by a 6-hour journey in an army truck to the middle of the desert. But that will just be the start. “It has been a journey getting to this point,But that will just be the start of our journey. “It has been a journey getting to this point,” Ben said. “Take yourself back to when you learned to drive. It was always much easier to take instruction from a driving instructor than from a parent or relative. At one point, I did have to tell Emily that she should not consider me her father for the purposes of training. "I have also had a trainer to come to the house one evening a week for us to train in hot conditions, but also work on core and upper body strength, which will be invaluable when scaling dunes or the odd desert mountain, as well as having to carry heavy packs. I have noticed a huge difference in Emily physically, but also mentally. During the Ultra Marathon she had a low point at 33 km and was full of doubt about her ability to finish in the time allowed. But she managed to pick herself up and get the job done. “That ability will be key to whether she finishes the Marathon des Sables at all.” Emily may well be the youngest participant in the Marathon des Sables, but sticking with the exhaustive training for such a monumental physical challenge, and working through it with her father, makes Emily Rolfe a champion on all accounts regardless. Ben and Emily have raised an astonishing £14,493 of their £20,000 target. Donations to Ben and Emily’s Diabetes 1 campaign can also be made directly on the secure Justgiving fundraising page.