Until Jan 15, 2017 Designing Dreams, A Celebration of Leon Bakst at NMNM-Villa Sauber 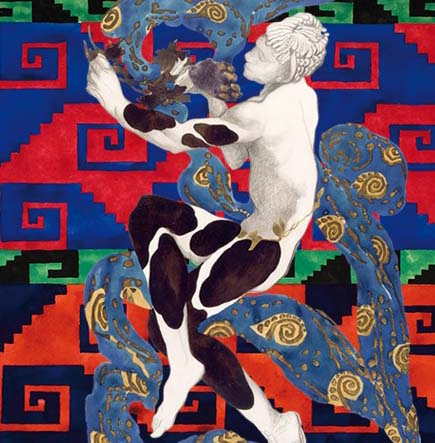 Conceived in collaboration with Professor John E. Bowlt of the University of Southern California and in cooperation with numerous international researchers and lenders, “Designing Dreams, A Celebration of Leon Bakst”, is an exhibition organised around the collections of the Nouveau Musée National de Monaco and the permanent deposits of the Société des Bains de Mer to mark the 150th anniversary of the birth of the famous stage-designer for the Ballets Russes.

Culture Stephanie Horsman - November 24, 2020
The Casino de Monte-Carlo has been honoured with a Community Award for commitment shown to the public during the pandemic and efforts during the #StrongTogether campaign.

Boris Cyrulnik and Charlotte Casiraghi, Founding Member of Rencontres Philosophiques de Monaco. Photo; Manuel Vitali/DC
 [/caption] The Monaco Philosophical Encounters hosted an important and successful lecture on the topic of "Childhood and Violence", given by Boris Cyrulnik, at the Princess Grace Theatre on Wednesday, February 14. After a presentation by Charlotte Casiraghi, founding Member of Rencontres Philosophiques de Monaco, the French neuro-psychiatrist discussed the evolution of violence in history as well as the dangers of emotional neglect and the different types of attacks – verbal, psychological, and physical, which can damage the child's relationship to the world and damage its brain. Recalling that the repercussions of violence can be detected in utero, Boris Cyrulnik, through the concept of "sensory niche", emphasised the need to develop as soon as possible a secure attachment with the child, which will induce him or her to develop strong self-confidence and self-esteem. [caption id="attachment_28344" align="alignnone" width="2953"]

Boris Cyrulnik and Charlotte Casiraghi, Founding Member of Rencontres Philosophiques de Monaco. Photo; Manuel Vitali/DC
  [/caption] In front of a passionate audience, with whom he largely interacted, he concluded his presentation with an extension of the conference’s theme by evoking the obvious links between violence and deculturation, violence and eroticism, violence and authority. Dr Cyrulnik’s interest in psychiatry, particularly psychological resilience, stems from his own childhood during WWII. As a Jewish child, both his parents were arrested and killed. In 1943, young Boris was captured by Nazis in Bordeaux but managed to avoid detention by hiding in restrooms and later living as a farm boy – Jean Laborde – until the end of the war. The funds raised during the evening will be fully donated to the Monegasque Association "Jeune J'écoute".