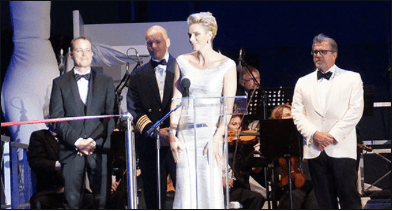 The ceremony was watched by travel agents, media, employees and past passengers looked on. Entertainment Tonight’s Kevin Frazier served as emcee for the ceremony, which featured a full orchestra and concluded with a fantastic performance from famed opera singer Andrea Bocelli, cruisecritic.co.uk reports.

The American and Monaco national anthems were played. Jason Montague, president and COO of Regent Seven Seas, and ship’s captain Stanislas de Lacombe thanked the crew and the Princess.

“Your highness, it’s an honour and a privilege to sail on your ship and to have you as godmother,” de Lacombe said.
Frank Del Rio, President and CEO of Norwegian Cruise Line Holdings, Regent Seven Seas’ parent company, thanked the people of Monaco and said the city can now count the christening among its accolades.

Del Rio said, “As that Old Milwaukee beer commercial used to say, it doesn’t get much better than this.”

In gusty conditions, Princess Charlene said: “I bless this ship Seven Seas Explorer and all who sail on her.” She blew a a kiss toward the ship, then cut the ribbon to release the bottle, which dutifully broke on hitting the ship’s hull.

Bocelli capped the ceremony with a mini concert that included lively renditions of famous opera songs such as La Donna e Mobile and Marechiaro along with popular hits like Volare and I Can’t Help Falling in Love with You.

Seven Seas Explorer is the first new ship for Regent Seven Seas since Seven Seas Voyager debuted in 2003. The line is calling Seven Seas Explorer ‘the most luxurious cruise ship ever built.’ The ship has the second-highest space ratio at sea and has a variety of large suites with oversized balconies. It also features a $5,000 per person per night cabin, called the Regent Suite, that includes unlimited in-suite spa treatments, a $150,000 bed and personal driver in port.

A second-in-class ship will debut in early 2020. That ship, a near-twin of Explorer, hasn’t yet been named.  ORIGINAL SOURCE: cruisecritic.co.uk, with local reports

Local News Staff Writer - March 7, 2019
A third of British billionaires have reportedly moved to countries like Monaco over the past decade in order to avoid paying taxes.

Local News Cassandra Tanti - July 1, 2019
Charlotte Casiraghi and Dimitri Rassam have continued their wedding celebrations with a second, religious service in the south of France.