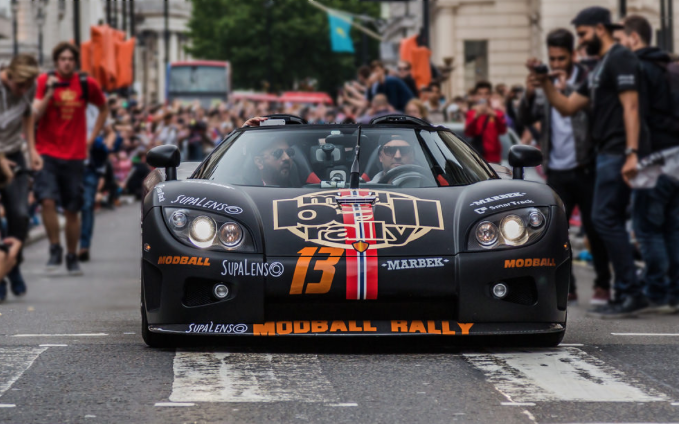 Seven top-end cars were stopped by French traffic police on Sunday just south of Calais after three vehicles registered 233 kph on the A26 motorway and many others ignored the 130 kph speed limit. A number of drivers have been summoned to appear at the Saint Omer Criminal Court. Police sources told the local press that among the cars stopped were a Lamborghini Huracan and a Mercedes AMG.

A number of drivers paid fines of 750 euros on the spot and had to continue the rally as passengers. A total of 180 participants, mainly British, paid up to 5,000 euros each to join the event, which takes in Paris, Lyon, Monaco and Barcelona, finishing on Friday night in Valencia.

AS Monaco faced a tough Dijon team Saturday night, one who had not conceded a single home game in the last 10.

The new F1 season doesn’t start for another month, but pre-season action in Barcelona is in full swing.

From Monaco striker to head of state

Photo: Twitter George Weah[/caption] Former Monaco striker George Weah has been elected as President of Liberia. In the second round of the presidential elections, held on Tuesday, December 27, the 51-year-old took 12 of the 15 counties for a convincing win over former Vice-President Joseph Boakai, 73. Weah is the first soccer player to be elected as head of state anywhere in the world. “The Liberian people clearly made their choice yesterday and all together we are very confident in the result of the electoral process. #Liberia #Liberia2017,” Weah declared via Twitter. George Weah grew up in Clara Town, one of the poorest neighbourhoods of the Liberian capital, Monrovia. While playing for a Cameroonian side, he was spotted by then Monaco manager Arsène Wenger, who signed him for AS Monaco for €14,000. [caption id="attachment_26683" align="alignnone" width="477"]

Weah named FIFA World Player of the Year in 1995. Photo: Twitter George Weah[/caption] The icon went on to play for several European clubs including Chelsea, Paris-Saint-Germain, and AC Milan, as well, in 1995, becoming the only African ever to be named FIFA World Player of the Year. Weah recently said of his Wenger, whom he considered his mentor: “He was a father figure and regarded me as his son. This was a man, when racism was at its peak, who showed me love. He wanted me to be on the pitch for him every day. "Without Arsène, there is no way I would have made it in Europe." He is well-loved in Liberia for his work as a UNICEF Ambassador and for coaching the national football team using his own money. [caption id="attachment_26684" align="alignnone" width="648"]

Sports Staff Writer - August 5, 2018
Peace and Sport will hold the 2018 Friendship Games in Bujumbura, Burundi from August 17 to 19, with the cooperation of the National Olympic Committee.