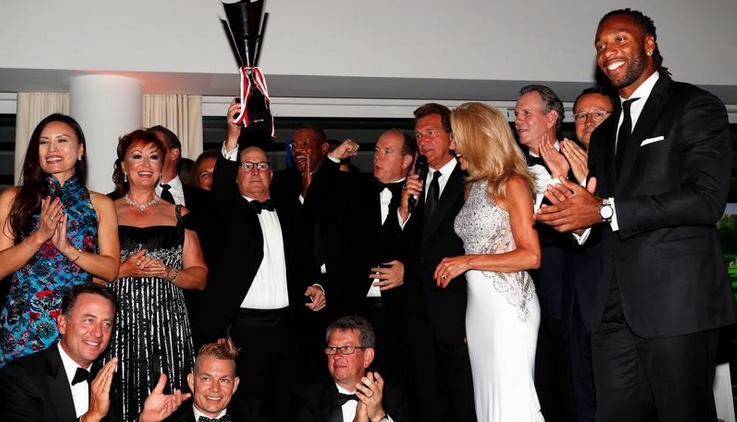 At a black tie gala on Sunday night at the Monaco Yacht Club, HSH Prince Albert II unveiled the cup at the first ever amateur Ryder Cup.

It was the nail-biting moment Team USA and Team Europe had been waiting for all day. Whichever end of the Laurence Jenkell-designed trophy was facing up, either the Star Spangled Banner or 12 yellow European Stars flag, would reveal which team won the first US-Monaco Celebrity Golf Cup.

As a kick-off to Ryder Cup 2018, the event benefitted the Ryder Cup European Development Trust to promote golf development at the grassroots for beginning players and for youth, ranging from free lessons at European Tour events to disabled golf initiatives, as well as junior and educational programmes.

The black-tie dinner for over 200, which included a special presentation to Prince Albert of monogramed golf bags for Monaco’s future golfers, Prince Jacques and Princess Gabriella, followed an action-packed weekend of events for players, including a cocktail hosted by Monaco Life on Saturday night at Stars’n’Bars.

Local News Staff Writer - August 13, 2018
The strike by a number of Monaco bus drivers is now three weeks old, with no sign of a resumption of normal service. 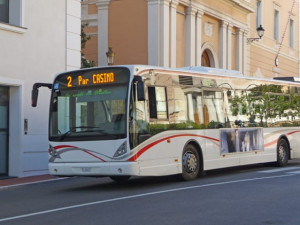 Monaco has long been a destination for visitors with a reputation for excellence, but the Principality is not resting on its laurels. The Monaco Bus Company (CAM) is often part of the visitor’s overall experience, and the quality of service is of great importance. Now, after an investigation by a specialised French company, the Monaco Bus Company has been awarded the “Monaco Welcome Certified” label to mark its excellent standard of service. Part of the process was a series of visits by “mystery clients”, who tested the welcome aboard the buses on Monaco’s six routes and at the company’s offices at 3 avenue President JF Kennedy. Since not everyone speaks French, part of the test was to see how drivers respond to questions from visitors who don’t speak the language. The cleanliness and general condition of the bus stops was another factor. CAM will wear this badge of honour for a three-year period, during which time more mystery passengers will be boarding the buses in the Principality.