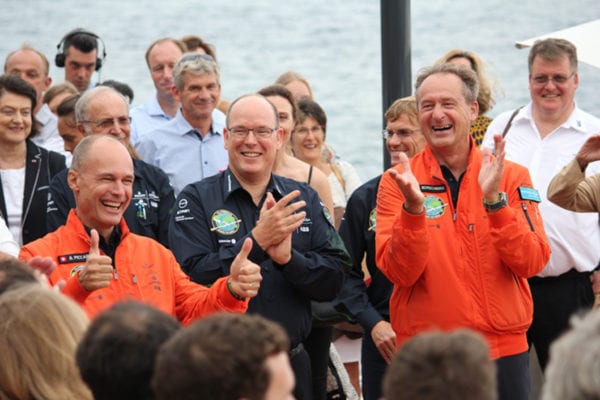 Speaking to some 140 members of the Solar Impulse 2 team, and a select group of partners and friends of the project, Prince Albert congratulated pilots and co-founders Bertand Piccard and André Borschberg, and the entire Solar Impulse team for helping to achieve such an amazing success. “There are few moments in life when one can say ‘I was there’ but this is one of those times.”

The head of state added,” In these troubled times, this Solar Impulse adventure represents much more than a technological, scientific or aviation success, and one for the history books. It’s also an incredible human adventure and I thank each and every one of you for the wonderful opportunity to be a part of your dream.”

A beaming Bertand Piccard, who looks much younger than his 58 years, addressed the group: “We have done it, we’ve successfully completed our tour of the world, with our incredible team. Tonight, we have here friends who have become partners, and partners who’ve become friends, brought together because we are not satisfied with how the world is functioning, with its pollution, its depletion of natural resources and a lack of respect for how we are treating the planet. We wanted to do something impossible to get people to listen to us.”

Following the unveiling of “Paper Plane”, a sculpture by contemporary Turkish artist   Mehmet Ali Uysal  and the symbol of the Solar Impulse 2, dedicated by Burak Oymen “to the Principality in recognition of Monaco’s contribution to the project, a milestone in humanity’s quest for a clean more sustainable future”, Piccard, Borschberg and Prince Albert were greeted by two facing rows of the Solar Impulse 2 squad, which included the two Belgian meteorologists, engineers, mission control from Monaco, marketing, photographers and partners, lining the path into the party.

Each of the jovial trio shook hands, high fived or hugged with each team member on one side, before jogging a triumphant lap back to the other side to repeat the same congratulatory recognition. The festive atmosphere continued in the reception, where even Prince Albert, dressed in the Solar Impulse uniform, took part in champagne spraying.

The highly spirited André Borschberg, 63, told Monaco Life at the cocktail, “What’s impressive is the people who trusted us, including Prince Albert, who gave us his support from the beginning after only seeing a few drawings.”

A very relaxed Prince Albert, who celebrated the tenth anniversary of his Prince Albert II of Monaco Foundation on June 30 this year, spoke to Monaco Life early in the evening about Solar Impulse 2’s accomplishment. “I cannot congratulate and thank this team enough,” he emphasised. “It’s a demonstration that renewable energies are a reality and if you put your mind to it, and put the right resources to it, you can apply it to not only other projects in aviation, others modes of transportation, housing…

“It’s just a tremendous statement for clean energy, and their motto ‘the future is clean’ is so important. It will have to be clean and thanks to Solar Impulse this type of technology is available and a reality.”

Solar Impulse 2’s epic fuel-free journey, which began on March 9, 2015 and finished July 26, 2016, covered more than 40,000 km (25,000 miles) in 17-stages, taking in four continents, three seas and two oceans. The entire circumnavigation of the globe was controlled from a command centre in Monaco.

Local News Stephanie Horsman - June 25, 2021
The 10th anniversary of the marriage of Prince Albert II to Charlene Wittstock will be celebrated with a 10-part mini-series chronicling their lives together.