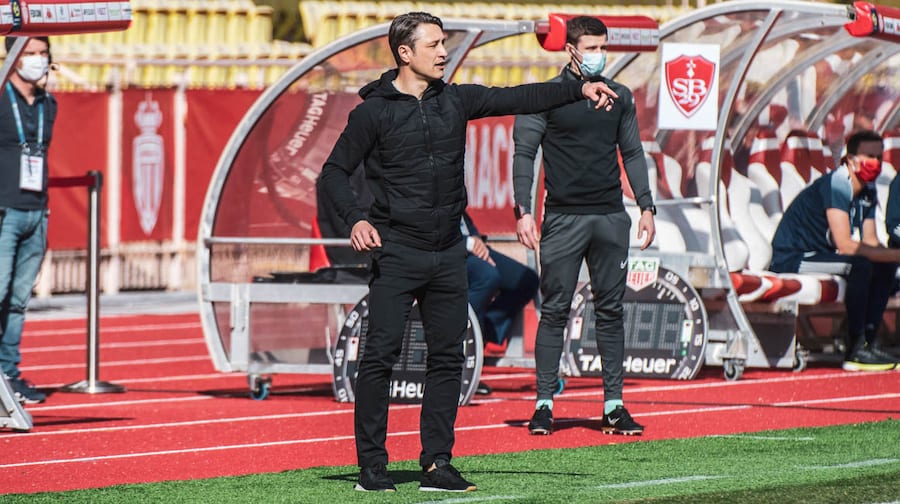 AS Monaco have chalked up another victory, this time at a home game at Stade Louis II where they faced off against Brest, extending the team’s unbeaten streak to 10 in a row.
AS Monaco are having an amazing 2021 so far. Sitting pretty in fourth place in Ligue 1 standings, one point from touching the top three and only four points off the number one spot, they are gelling as a team and making plays happen, truly earning their place at the top of the heap.
On Sunday, they went up against Brest, and Coach Kovac wasn’t taking any chances with the starting line-up. He played a 3-4-3 set-up with three central defenders and two wide players as wings. With Ruben Aguilar on the right and Caio Henrique on the left, they were well covered.
Both teams had solid starts to the match, and the first half saw a lot of good defence. It wasn’t until half an hour in that the Red and Whites had their first big chance due to a penalty. Wissam Ben Yedder took the shot but was blocked by Brest’s goalie Gautier Larsonneur who made a splendid dive to the right.
By halftime, the game was still scoreless.
Coming out of the locker room, Monaco wasted no time, with Ben Yedder taking a straight shot at 47 minutes but was blocked again by Larsonneur. Caio Henrique was up next, making a solid left footer that narrowly missed the mark. Then three minutes later it was Ruben Aguilar who made an attempt. The Brest goalkeeper was certainly earning his keep.
Coach Kovac played in Aleksandr Golovin, Krépin Diatta and Stevan Jovetić to change up the energy on the field. This was the game changer. It was Jovetić who made the game’s opening goal at 76 minutes into play on a pass from Golovin. Now leading 1-0, this emboldened the Red and Whites and they held the lead, even stretching it in the very last minute with a beauty of a goal made by Kevin Volland. The game ended 2-0 Monaco.
After the game, Coach Kovac praised his team’s performance, saying, “I was happy with the first half, we had dominated possession and we weren’t conceding chances. The second half was even better, we had control over the whole match. It was a good performance today.
“We have conceded fewer chances like we did in Paris, we have to keep working on that. It shows that we are moving forward together. It’s good for our goalkeeper to spend an afternoon without seeing the ball in the back of his net.”
The Red and Whites play again on Wednesday against Strasbourg at the Stade de la Meinau.


Monaco Life with ASM press release, photo by AS Monaco