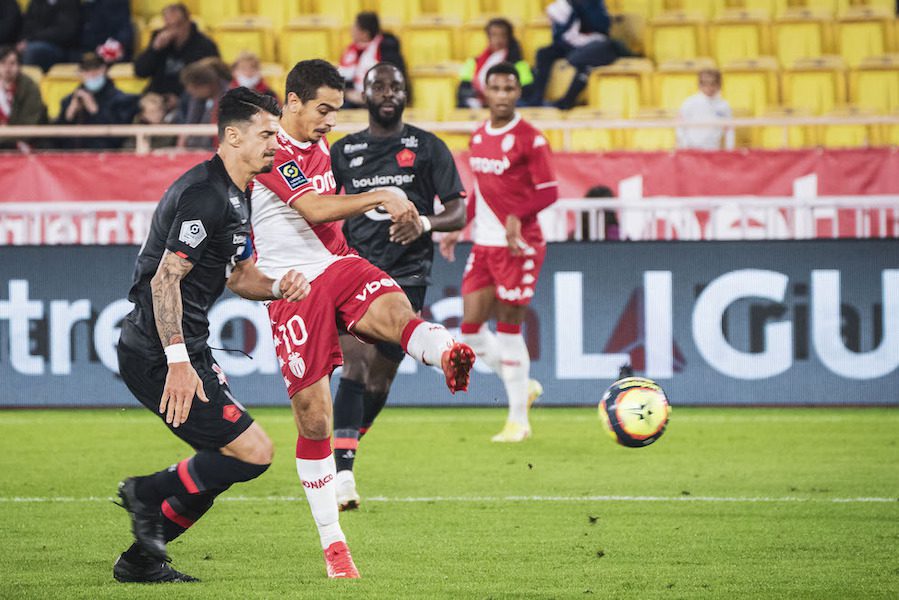 A spirited second-half performance from AS Monaco saw them rescue a point against reigning Ligue 1 champions Lille. The game looked beyond Nico Kovac’s side having conceded twice early on, but Wissam Ben Yedder’s unlikely equaliser following an ASM red card saw the game finish 2-2.
For the first match after the international break, Kovac deployed a slightly unfamiliar system. Aware of the threat posed by Lille’s 4-4-2, ASM matched their formation with the aim of nullifying the attacking threat, which had the potential of creating overloads on the ASM defence.
This plan however, was quickly torn-up, either through a lack of sharpness following the break, or a lack of preparation in this unfamiliar system. Within two minutes, Lille took the lead from the penalty spot after Strahinja Pavlovic’s reckless challenge in the box, which saw the Serb subsequently receive a yellow card. The prolific Jonathan David finished from the spot, sending ASM keeper Alexander Nübel the wrong way.
Lille weren’t done there. What followed the opener was a relentless barrage on the ASM goal, which, had Lille been more clinical, could have seen them out of sight within the first 30 minutes. David got his second in only the 8th minute, latching onto a simple ball over the top and neatly slotting past Nübel to double their lead.
Lille continued to carve open the ASM defence at will, with untracked runners easily running in behind the defence. Good chances fell to David, who could have easily had a first-half hat-trick, Nanitamo Ikoné, and Timothy Weah. The turning point came late in the first-half, when Daivd, through on goal, failed in his attempt to chip Nübel; Monaco then went down the other end and scored through a rifled shot from Krépin Diatta, to give ASM an unlikely route back into the tie.
ASM, having reverted to a more familiar 3-4-3, came out completely revitalised for the second-half. Kovac’s men created a flurry of high-quality chances, lifting the crowd, and the players in return fed off their intensity. Despite this, ASM couldn’t get the ball over the line, Kevin Volland was denied by an expert goal-line clearance, whilst good chances also fell to Gelson Martins and Axel Disasi.
ASM’s chances of rescuing a draw looked to have been scuppered, when Pavlovic, already on a yellow card, saw a second yellow and subsequent red card for a carbon-copy of his first challenge. Ben Yedder, however, rescued a point late-on with a fiercely-hit shot, which beat the Lille goalkeeper for pace, and earned Monaco a deserved point.
Monaco winger Sofiane Diop praised the side’s second-half performance. “Even though we would have preferred a different result, this second-half will do us a lot of good… it gives us a lot of confidence physically and mentally.”
Looking forward, Diop sees the result as a building-block for Thursday night’s match against Real Sociedad, as well as for the rest of the season. “I am very confident that this match will be important for the rest of the season.”