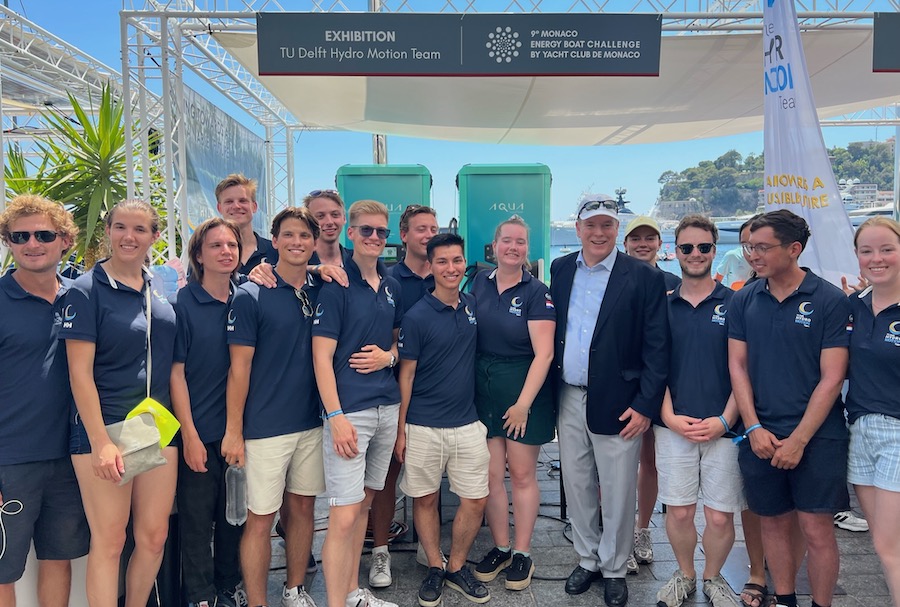 A mixture of competitiveness and cooperation, the Monaco Energy Boat Challenge (MEBC) returned to the Principality for its ninth edition showcasing the latest innovations in clean energy and naval engineering.

Whilst providing entertainment for spectators and attendees, including Prince Albert II who visited the paddock on Thursday, the ultimate aim of the event is to be at the cutting edge, facilitating the development of sustainable solutions within yachting.

38 teams from 21 nations descended upon the Monaco Yacht Club (YCM) to showcase their inventions, from hydrogen fuelled vessels, to boats covered in solar panels, there is a diversity in the innovative ecological solutions on display.

Materials engineer of Monégasuqe team SBM Offshore, Kevin Schietsel spoke to Monaco Life about the growth of the event. “We have the impression that the event is really growing. There are more and more exhibitioners. The whole line of exhibitions in the paddock was never there previously. The room behind it is full as well. The event is on the rise! The first year we were here there were only eight of us, now we are 14,” he said.

On a competitive level, Schiestel is hoping to beat Italian team UniBoAT, who pipped them to last year’s title. “We’re here for the victory. We have many rivals that are well prepared, two Italian teams that are very, very strong, one of which won last year. Last year we were second just behind them. We hope to beat them but it will be difficult,” said Schiestel.

Although their hydrogen model didn’t work as well as hoped on the first day of competition on Thursday, Schiestel was nonetheless pleased that the model worked. The same can’t be said of all the boats that took to the water of Port Hercule for the opening parade.

Trial and error are, however, essential elements of innovation, and this year’s edition, more than any other, showcases some of the most innovative technologies that they hope can be adopted into the yachting industry. For Bernard d’Alessandri, general secretary of the YCM, the construction of the boats themselves marks a notable milestone.

He told Monaco Life, “We’re no longer at the point of raising awareness, but of taking action. The people here have constructed their own boats; they’re here with solutions, and we’ve moved from ideas to solutions and projects. Everyone is facing this reality, looking at how we can react and change things.”

It isn’t just about the boats, but also the engineers and the students that design them. As well as exhibiting some of the most cutting edge nautical technology, the event is also an opportunity to network and share vital expertise and experience.

A series of conferences, tech talks and job forums allow the different teams and exhibitors to pool their knowledge, whilst also providing young talents the opportunity to find jobs and internships within the growing industry that is sustainable yachting.

Back in 1904, Monaco hosted the first meeting of small boats in Monaco, where at the time, they were testing motorisation. Now, in 2022, Monaco perpetuates that tradition of innovation, by maintaining their position at the cutting edge of everything that is new and innovative in a yachting industry that is recognising the need to take an eco shift.