In their traditional Christmas card, issued on Friday, December 22, Prince Albert and Princess Charlene and their children, hereditary Prince Jacques and Princess Gabriella, wish everyone a Merry Christmas and beautiful festive season.

On Wednesday, December 20, Prince Albert and Princess Charlene warmly welcomed young Monegasques for the traditional Christmas celebration at the palace.

After watching a performance of Palladienne dance in the palace courtyard, with Santa in attendance, some 500 petite guests, aged 5 to 12, attended a magic show in the throne room, where they were also treated to a snack.

They youngsters also received Christmas gifts from the princely couple, and the children of Princess Stephanie, Camille Gottlieb and Louis Ducruet.

Hereditary Prince Jacques and Princess Gabriella, who celebrated their third birthday on December 10, did not attend the festive events as they, reportedly, have a touch of the flu. 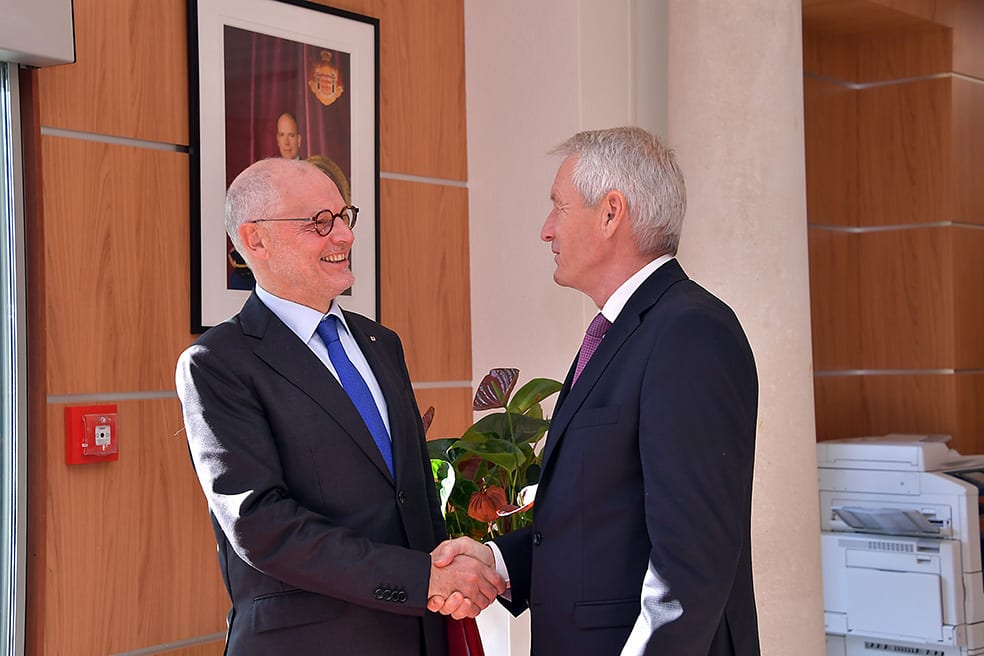 Minister of State, Serge Telle with Mr Thorbjorn Jagland, Secretary General of the Council of Europe. Photo: ©Direction de la Communication/Charly Gallo[/caption] The Secretary General of the Council of Europe, Mr Thorbjorn Jagland, made an official visit on October 27 to Monaco, the first since the Principality’s accession to the organisation in 2004. The Secretary General was received in audience by HSH Prince Albert, attended by Ms Anne-Marie Boisbouvier, Advisor to the Prince's Cabinet, Mr Gilles Tonelli, Government Minister Counsellor of External Relations and Cooperation, and HE Mr Rémi Mortier, Ambassador, Permanent Representative of Monaco to the Council of Europe. A working meeting was also held in the presence of HE Mr Serge Telle, Minister of State, with government ministers, advisers and legal advisor to the Government and the Representative for Legal Affairs also present. Mr Jagland, and his delgation, also met HE Mr Philippe Narmino, Director of Judicial Services, and Mr Christophe Steiner, President of the National Council before meeting with Anne Eastwood, High Commissioner for the Protection of Rights, Liberties and Mediation. During the visit, there was discussion about the Principality’s participation in the Council of Europe and its benefits as a result, as well as points raised about the fight against terrorism, international security, prevention of violent extremism, the migrant crisis and the situation in Ukraine. Various parties also met with the Secretary General to clarify initiatives taken by Monaco in favour of Human Rights, and the many actions undertaken since the accession of Monaco, notably in the fight against corruption or money laundering, and those in support of the efficiency of justice. READ ALSO: Minister of State discusses Monaco’s EU negotiations with Euronet+

Michel Dotta, MEB President, with Nikolaus Meyer-Landrut, Ambassador of Germany to France. Photo: Realis[/caption] On Friday, February 23, nearly 60 economic players in the Principality came to meet His Excellency Nikolaus Meyer-Landrut, Ambassador of Germany in France and Monaco, for an Ambassador's Lunch dedicated to the economic opportunities of this flagship country of the European Union, which is also the fourth largest economy in the world. Ambassador Meyer-Landrut highlighted the economic stability of his country and emphasised in particular the constant growth of German GDP, 2.2 percent in 2017 and a forecast of 2.4 percent in 2018, high domestic demand and a strong labour market, with high employment and dynamic earnings growth. To support its competitiveness, however, Germany must face new challenges related to the ageing of its infrastructure and the risk of a lack of qualified manpower and rising labour costs, he said. The new coalition agreement includes major investments in R&D and innovation, education and digital transformation. In terms of finance and taxation, the goal is a balanced budget with no new debt and no tax changes. As far as business opportunities for Monegasque entrepreneurs are concerned, they would be welcome particularly in the areas of health, urbanisation and digitisation, sectors that have a high demand for expertise and which are also of interest to Monaco. [caption id="attachment_28537" align="alignnone" width="640"]

Nikolaus Meyer-Landrut, Ambassador of Germany to France. Photo: Realis[/caption] Germany is the main partner of the Principality for exports, which amount to 15.4 percent in total. In terms of imports, Germany is in third or fourth position, depending on the year. Also important is the fact that the German community resident in the Principality totals 907 people. Two hundred and twenty-three Germans are employed in the private sector. According to MEB President Michel Dotta, “These exchanges can still be developed, and with this in mind, the Monaco Economic Board will organise an economic mission to Frankfurt from June 12 to 14, in collaboration with the Frankfurt Chamber of Commerce, with the support of the Monaco Embassy in Germany and that of the German Embassy in Monaco.” The Monaco Economic Board has already planned a trip to Düsseldorf in 2019 and Munich or Berlin in 2020.