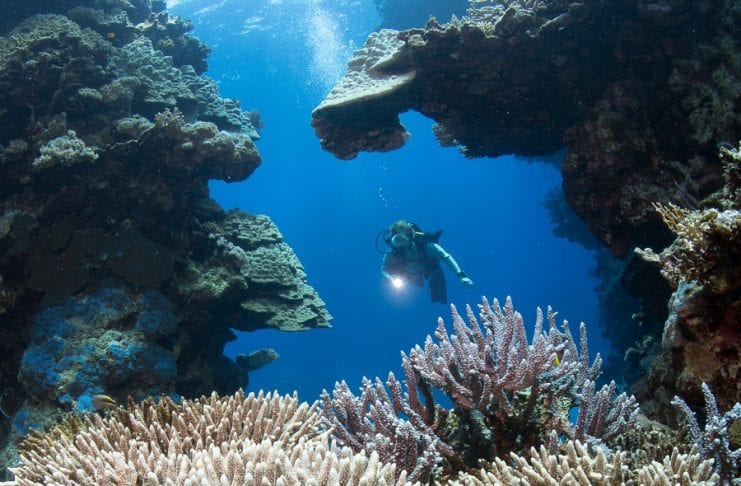 The Federation of French Groupings of Monaco is exhibiting Profondeurs from 16th October to 6th November. It is photographer Olivier Jude’s take on life under the seas today. His works are drawn from expeditions to the Red Sea, the Indian Ocean, Bali, Sipdadan in Malaysia and closer to home, right here in the Mediterranean.

The show, under the patronage of Prince Albert II, showcases his work in a way that is meant to make visitors think about our human relationship to the sea. The photos include model and fellow diver Sylvie Laurent intermingling with coral reefs or swimming amongst the fish, reminding us of “the idea of ​​human interaction at the heart of underwater biodiversity.”

There are also a series of scenes, entwining the boundaries between land and sea and between the natural structures of the Med mixed with the evidence of human contact over the ages. Shipwrecks close to the coastline illustrate an underwater maritime heritage that is now as much part of the seascape as coral reefs or sea grass.

The artist’s photos are not retouched, giving them a rawness and highlighting “a very particular dialogue between man, the underwater fauna and flora, imbued with deep respect.”

Jude’s wife, Designer Valérie Jude, also has a hand in the works. She created the underwater clothing, intended to blend and harmonise with the natural beauty of the seabed.

Visitors can experience the Profondeurs exhibit Monday to Friday from 10am to 12pm and again from 3pm to 6:30pm, except on public holidays, from now until the 6th of November.