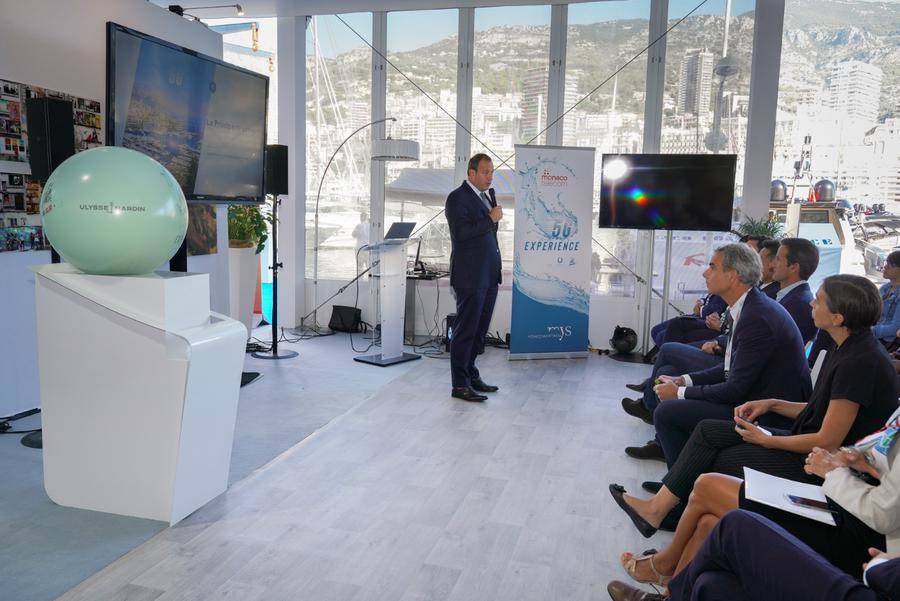 Monaco Telecom unveiled, as a world premiere, its nationwide 5G mobile network on the occasion of the Monaco Yacht Show.

Frédéric Genta, Interministerial Delegate in charge of the digital transition, stressed that “The Principality is the first country in the world to open the 5G: the face of the Monaco of tomorrow is emerging today and we could not create a smart nation without a strong partnership with a telecom operator.

“The power of the 5G implemented via a precise grid of the territory will be an essential platform for the digital transition. This launch proves that, day after day, the Prince’s Government is creating the face of the Monaco of tomorrow.”

From a technical point of view, the 5G will be able to obtain rates multiplied by 10 and connection times divided by 10. Simultaneous processing will be 10 times higher and can support more objects connected by antenna.

Thus, 5G will support the exponential growth of Internet usage in mobility. The first smartphones capable of supporting this new technology will be available in 2019.

This development is therefore naturally part of Monaco’s evolution as a precursor in the field of connectivity, and accompanies the Principality’s digital transition, a project led by M.Genta.

Work under way to transform Monaco for...

Local News Staff Writer - March 28, 2019
A few weeks before the E-Prix (May 11) and Grand Prix Formula 1 (May 26), the Directorate of Urban Development is developing the racing circuit.

Ardmore's Fée Halsted, Karen Shine, Catherine Berning and Roger Shine at Monaco Yacht Club. Photo: Monaco Life[/caption] For the first time in Monaco, an exhibit of South African Ardmore Ceramic Art, with more than 250 pieces for sale, is taking place at the private dining room at the Yacht Club. With the support of Roger Shine, Lady Tina Green and Daniela Boutsen, the must-see show runs from Tuesday, November 28, until Thursday, November 30, and offers Monaco residents a chance to pick up an exquisite piece of hand-painted art – just in time for Christmas. The selection, with its enchanting reflection of African playfulness, includes small salt and pepper cellars, large vases‚ teapots‚ trays‚ candle holders‚ butter dishes, jewellery boxes and textiles that range in price from €70 to €6,000.

A portion of the sale will be donated to the Princess Charlene of Monaco Foundation. “Over the years, I’ve bought several Ardmore pieces,” said Roger Shine, who was instrumental in bringing Ardmore to Monaco. “And since the Prince is married to Princess Charlene, who is South African and has art from Ardmore‚ I suggested an exhibition and the idea of raising money in support of the Foundation.” Open daily from 11 am to 8 pm, visitors will also have the opportunity to meet Ardmore Ceramic founder, Fée Halsted, and her daughter Catherine Berning, who runs Ardmore Design. The family duo is as colourful and authentic as the pieces they produce, but more significantly, they are sharing the history of their country one piece of ceramic, or scarf (Ardmore has an exclusive collaboration with Hermès) at a time. “Where I grew up in Bulawayo, Zimbabwe, there was beautiful African flora and fauna. It was so rich,” Ms Halsted told Monaco Life. “And there were all these creatures, like the pangolin, that people had never heard of, so I also became very passionate about the wildlife.”

Ms Halsted explained that Ardmore’s artists are rural people. As boys, they never had stuffed toys to play with but looking after their father's cattle all day, working with clay became natural to them and they are skillful at sculpting. “They would model little oxen or little farm animals in clay, but they didn’t have access to the technology to create colour. Yet you see their love for colour when you look at South African bead work, which they got from Arab traders, and masks.” For Ms Halsted, who created Ardmore Ceramics in 1985, all this “incredible creativity” is wasted in Africa because in schools, young people are taught Math and English instead of creativity. “I know one painter who couldn’t get paint, so he took torches to plastic waste bags to make oil colours for his paintings, the most incredible oil paintings you’ve ever seen, which shows the creativity is instinctive but they can’t afford it.” [caption id="attachment_25802" align="alignnone" width="640"]

Ardmore artists with Fée[/caption] The Ardmore School teaches future ceramists about sculpting, painting, glazing and art history. The creative process involves four stages and four people are therefore involved; it is not one artist who completes a piece from start to finish. Graduates are rewarded with a certificate. By teaching them a skill and encouraging their imagination based on nature, Zulu folklore and tradition, Ardmore Ceramics has given South Africans a chance to be entrepreneurs and be in control of their own destiny. The Ardmore artists are paid for the work they produce. “They have the responsibility to manage the money they’ve earned. It’s not a handout. Now people can afford cars, or a taxi service so another man earns from this. Maybe a school develops. It’s about contributing back to society.” Ardmore also does community work in prisons. “We go there and we actually teach them ceramic skills, to preoccupy them with creativity,” explained Ms Halsted, who has a degree in Fine Arts from Natal University in Pietermaritzburg, plus a two-year postgraduate course in ceramics. “So they have a future and once they come out of prison they don’t have to be on the street.”

Ardmore’s decorative storytelling designs “celebrates life” said Ms Halsted. “I’ve seen firsthand that people’s lives are tough and hard in South Africa, where they’ve been ill with HIV and AIDS. Since 2010, we haven’t had anyone die from AIDS but I’ve lost about 40 artists from the disease – talented people who didn’t have to die. “However, through that, South Africans embellish a fantasy world, one that has transported them out of a tough life into one of beauty.” Described by one observer as “the most extreme form of decorative pottery I’ve even seen,” Ms Halsted hopes that Ardmore Ceramics, of which each piece is individually hand-signed by the artist, will “transport you to another culture”. Indeed it will. As you will discover this week at the Yacht Club. The Ardmore Ceramic Art exhibition in support of the Princess Charlene Foundation is open to the public. It runs from Tuesday, November 28, until Thursday, November 30, 11 am to 8 pm, at the Yacht Club's private dining room. Article first published November 28, 2017. [gallery td_select_gallery_slide="slide" size="large" ids="25792,25791,25800,25789,25783,25795,25794"]