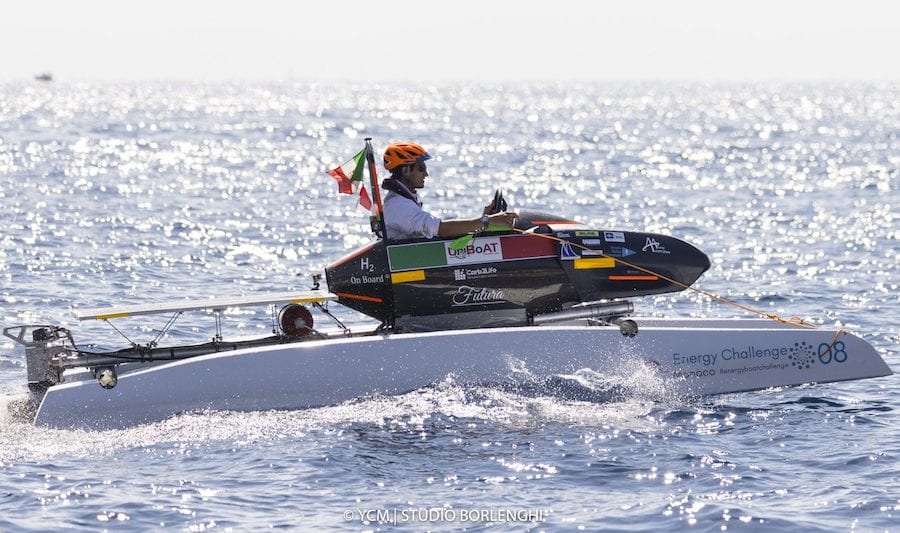 A week brimming with events, exchanges, races, successes and setbacks, triumphs and disappointments at the Monaco Energy Boat Challenge reached a peak on the final day with an endurance challenge and speed duels – more than enough to push the 32 teams in all three classes to the limits of their sporting and intellectual resources one more time.
There to see them on 10th July were HSH Prince Albert II with his distinguished guest, the explorer Mike Horn, coming both to support participants and find out more about all the innovations presented during the week, on the sea and ashore in the exhibitors’ village.
The Open Sea Class faced their toughest endurance test yet, as they had to prove, by racking up laps on a circa three nautical mile course, their capacity to go the distance, as far and as long as possible throughout the day. Hynova pulled off the best performance, almost equal on points with the Candela team, the Tenderworks team having been disqualified for breaking the rules despite their excellent result with 20 laps completed, the equivalent of a return trip to Cannes.
For those in the Energy and Solar classes, the morning was spent on a spectacular timed with elimination slalom event. No surprise to see Sunflare Solar Team triumph ahead of the Swiss students from Lausanne’s EPLV on their foiling Swiss Solar Boat, and the Dutch students on HAN Solar Boat. In the Energy Class, the Italians with their Uniboat dominated as they had done all week, to consolidate their position ahead of the Monegasque E-Racing Team and the students from Capgemini Engineering.
The afternoon was dedicated to the ‘Championship Race’, as the eight fastest boats in the qualifying heats on Thursday went head to head in the quarter, semi and finals inside the marina. This comprised spectacular duels on an inner loop-outer loop course that delighted both participants and the crowds gathered to watch on Quai Louis II. In the Solar Class, Sunflare again showed its superiority, beating the Lausanne EPLV Swiss team’s prao with the best of three races. In the Energy Boat Class, the Bologna University students consolidated their success, their hydrogen prototype winning the final ahead of the Monegasque E-Racing Team.
At the end of this final super intense day, all participants were invited to attend the prize-giving where several prizes were up for grabs, both for results at sea in each Class, awarded by Race Director, and for the presentations on land during the daily Tech Talks, as well as those of the exhibitors by an International Jury of experts chaired by Jérémie Lagarrigue, CEO of EODev. In all,there was a total of 10 awards.