While December 14 was a typical Wednesday for many in the Principality, except for perhaps picking up a few gifts for under the Christmas tree, Prince Albert had a full schedule, showing a tireless sovereign that puts the people first.

Fresh from Quebec City, Canada, where HSH participated on Tuesday in an Arctic Circle event on sustainable development (at which the Prince’s motorcade was nearly blocked by protesting government lawyers and notaires as he arrived at Premier Philippe Couillard’s office to sign a partnership agreement), by Wednesday morning at 11:15 am, Prince Albert was paying a visit to the tribute exhibition to Monaco’s former Minister of State, Michel Roger, at La Cremaillere restaurant.

The restaurant on blvd Princesse Charlotte has been open since 1874 – in the days of Prince Albert’s great-great grandfather, after whom he is named and said to follow in his explorer footsteps – and was at one point a train station when there was service to La Turbie. It’s now a listed historic building.

The Michel Roger exposition, open to the public until December 20, is part of an initiative launched by Anett-Patrice van York, who five months ago called on artists in and around Monaco to create a portrait of Mr Roger, Monaco’s former Minister of State, who suffered a stroke last December and is due to be released from hospital in Poitiers any day. The result was 20 original works, from paintings to pop art, and from sculptures to multimedia.

The Prince genially shook everyone’s hand as he entered the cosy room. He then observed every piece of art, speaking to each of the artists present. He also posed for a photo with the restaurant staff – “This is such an honour for us to welcome HSH Prince Albert,” manager Steffane Anne told Monaco Life – and signed a tribute letter to the former Prime Minister. A few more photos, and half an hour later, he was off.

Later that afternoon, and sporting a green Christmas tie, a indefatigable HSH and Princess Charlene, welcomed 600 Monegasque children for the traditional Christmas at the Palace.

Also present to lend a hand were HSH Princess Stephanie’s children, Louis and Camille, and Prince Jacques and Princess Gabriella shared in the festivities for the first time.

All the children attended a magic show in the Throne Room where a snack was served before the Princely couple distributed gifts and then posed in the courtyard for the annual photo.

Not quite done for the day, at 6:45 pm, Prince Albert pulled up to the Hotel de Paris for the “Vente aux enchères de sapins de Noël”, the annual Action Innocence fundraiser that auctions Christmas trees for charity. (The trees are on display to the public until December 16.)

Greeted by Action Innocence President and CREM Founder Louisette Levy-Soussan Azzoaglio, a cheerful Prince made his way around the shoulder-to-shoulder 200-strong crowd (“I’ve waited six months to get a photo of the Prince,” a delighted onlooker shared with Monaco Life), again shaking many hands, as he gradually walked to the back of the lobby where his table, in the company of Levy-Soussan Azzoaglio, close friend Mike Powers and a few select others, faced the auction action. This is when his security team asked well-wishers to stop taking photos. And the bidding began.

These funds will allow Action Innocence to continue its preventive action in Monaco schools to raise awareness for children, parents and educational staff about the dangers of the internet and the abuses of new technologies.

Also Wednesday evening, Prince Albert attended an awards ceremony at 8:30 pm at the Automobile Club of Monaco, in honour of those who distinguished themselves throughout the 2016 season in their respective sports disciplines. Nico Rosberg, Monaco’s pride and joy, was presented by Prince Albert an original work of the British artist Michael Turner, representing his third and last victory in the streets of the Principality in 2015.

From Toronto to the Rock, Albert is clearly a Prince of the people. 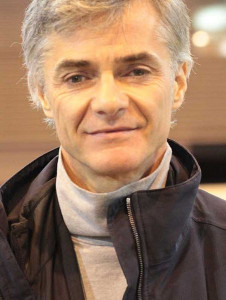 Cyril Viguier Photo: Charles Midor[/caption] Cyril Viguier, the TV producer and presenter, has once again put the spotlight on Monaco following his “Inside the Rock”, shown in 2013. For his first broadcast about the Principality, the palace gates were opened for an interview with the Princely couple and a documentary that was broadcast on France 3 in December 2013. His follow-up programme, “Monaco Lifestyle” challenges the usual clichés and highlights the economic dynamism of Monaco, its diversity, and its talents. The documentary is scheduled for broadcast in 2017 on TV5Monde, the channel with an audience of nearly 300 million potential viewers in 200 countries.

Local News Staff Writer - October 15, 2018
In support of the International Day of the Rights of the Child, many merchants of the Principality have decided to join the Children's Moneybox initiative.