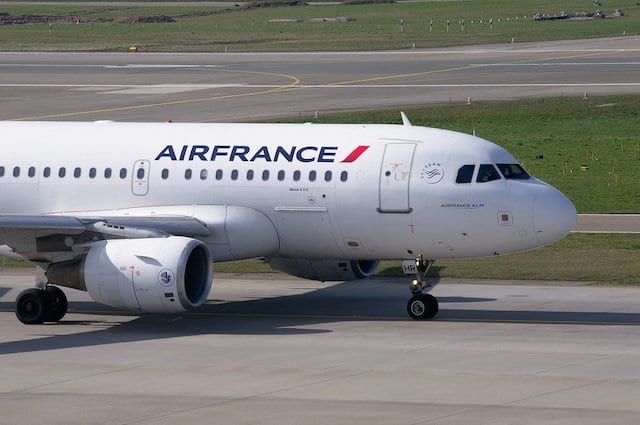 Air France has said it is looking to resume 30% of its normal flights by July, as well as gradually increasing flights to and from major destinations from 11th May.
Air France is already looking ahead to the new reality post-lockdown by increasing the number of flights between Nice, Toulouse and Marseille, three of the major French airports that have remained open during confinement.
Starting in July, the airline is hoping to increase flights from the current 5% of normal capacity up to 30%, subject to border re-openings, both inside and out of the EU.
Currently, more than 90% of Air France-KLM flights have been cancelled leaving 45,000 workers on partial unemployment. Skelton crews have been managing the few flights that are operating from Paris Charles de Gaulle to select European destinations, while Orly has been completely shut since the end of March.
Additionally, there are a small handful of flights heading to international destinations. On the list are New York, Los Angeles, Montreal, Mexico City, Rio de Janiero, Sao Paulo and Tokyo, as well as three destinations in Africa. Service to the dom-toms has continued in a limited way, mainly for repatriation purposes, to Martinique, French Guiana, Guadeloupe and La Reunion.
The good news for those intrepid passengers who are ready to fly again is that, not only will they be able to get flights more readily, they will be less packed. The global airline trade alliance IATA has set out some ground rules for post-confinement flights. Social distancing regulations would mean planes would be no more than two-thirds full. The body will be asking airlines to disallow three passengers seated in a row for the time being, leaving the middle seat empty.
Airlines are shooting back that these measures are not only impractical, but ineffective. The impossibility of keeping social distancing rules on a vehicle with recirculated air makes the regulations sound rather ridiculous indeed. The airlines are instead suggesting taking a page from the Asian airlines who have imposed temperature screenings and mandatory face masks on flights to make them safer.