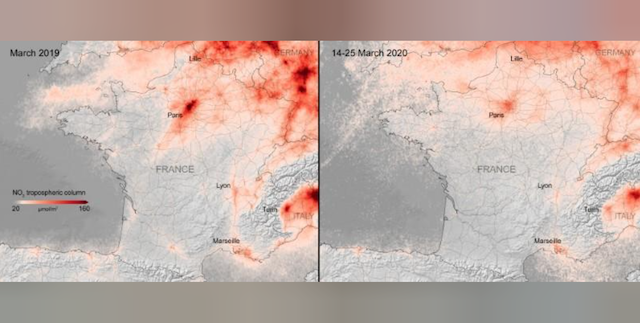 Satellite data distributed by the European Space Agency show improvement in air quality in vast swaths of Europe since the confinement period began.

Air pollution has fallen by an estimated 40% in many major European cities, notably Paris, Milan and Madrid, since coronavirus lockdown measures have been in place.

The amount of nitrogen dioxide, a key component of air pollution, has visibly fallen as shown by the Copernicus Sentinel-5P satellite images released last Friday. The three composite images show side by side visuals of cities over Monaco, Italy, France and Spain in the period from 14th to 25th March versus images from the same time last year.

Researchers are studying the impact on the environment as emissions from industry and transport slow during confinement and are struggling to understand the possible inferences. Preliminary assumptions are that anthropogenic pollution comes mainly from traffic, airplanes and industry. No big surprise there. But the proof of rapidity in which the air cleanses itself has been a big eye opener for many.

Nitrogen dioxide is emitted by cars, power plants and factories and is blamed for respiratory and heart conditions in humans. According to a European Environmental Agency report in 2019, nearly every person living in a city on the continent is exposed to air pollution exceeding healthy levels each day.

Photo: A combination image distributed by the European Space Agency (ESA) on 27th March 2020 shows the average nitrogen dioxide concentrations from air pollution in March 2019 (L), and from March 14-25, 2020, as mapped by the Copernicus Sentinel-5P satellite.