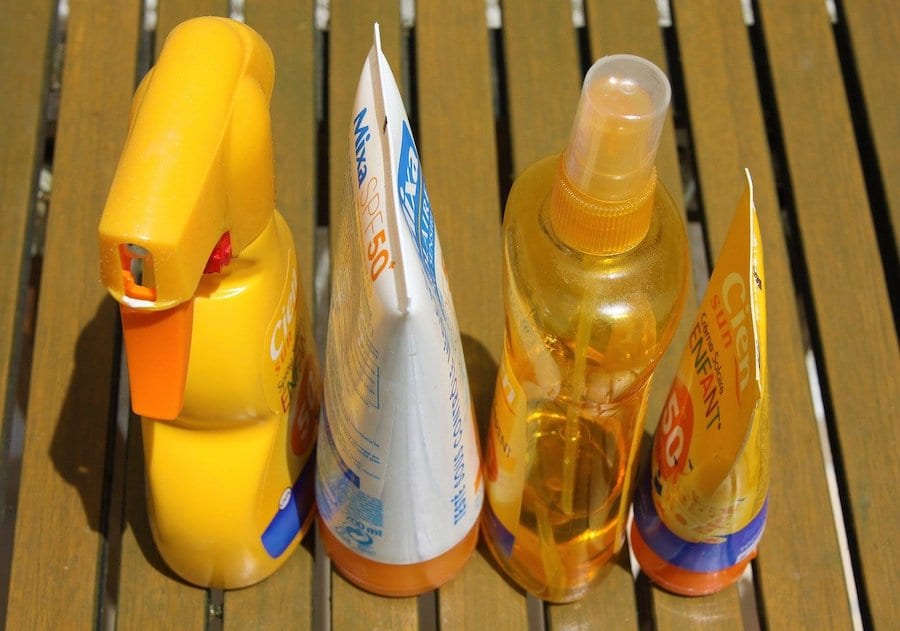 A wide range of sunscreens for children have been found to contain “very harmful” substances, according to two French environmental associations who are calling on the government to ban some products from the market completely.
A recent report by Wecf France and Agir pour l’Environnement revealed the results of their survey of 71 sunscreens for children that are sold in supermarkets, pharmacies and organic shops.
The teams screened the ingredients lists for “substances of concern” including endocrine disruptors (EDCs), nanoparticles and allergens, based on the most recent scientific literature available.
They also analysed whether some products were in compliance with the mandatory labelling of ingredients containing nanoparticles.
“We identified 29 ingredients of concern in the 71 sunscreens for children and classified them from red for substances of very high concern, orange for substances of high concern, to yellow for substances of concern. Five substances are EDCs of very high concern,” they concluded in their report.
Alarmingly, they found that none of the 71 sunscreens tested were free from the substances of concern classified in the three categories, while nine sunscreens were identified as containing a mixture of at least 10 ingredients of concern. Three products were found to contain nanoparticles not indicated on the label and are therefore non-compliant with the cosmetics regulation.
Meanwhile, the researchers found seven substances classified of very high concern which are known to have extremely adverse effects on aquatic ecosystems.
As a result of the findings, the two groups have called on the French Agency for Food, Environmental and Occupational Health and Safety (ANSES) to evaluate the risk-benefit of sunscreens for children – the benefits of protection from adverse effects of sunlight versus the risks resulting from the presence of chemicals of concern.
They’re also asking the government to ban the substances it has classified red (of very high concern) and found to contain EDCs, nanoparticles, and fragrance ingredients known to be contact allergens.
“We urge France to become a leader in protecting the health of children from adverse effects of EDCs, including a ban of all those substances in children’s products,” the authors said in the report, adding, “We also urge the European Commission to promptly regulate the 28 known or suspected EDCs used in cosmetics.”
They are also calling on the relevant authorities to take “strong measures” to ensure manufacturers and retailers comply with the mandatory labelling of nanoparticles in cosmetics.
Popular brands to have been found to fall in the red category are La-Roche-Posay, Biafine, Bioderma, Cien, Eucerin, Garnier, Isdin Pediatrics, Lancaster, Lovea, Mixa, Nivea and Vichy.
Meanwhile the brands Lovea bio spray, Bioregena, Praïa bio spray, Eco Cosmetics, Attitude, Acorelle and Alphanova all registered one substance only of high concern.
See the full list of products at the end of the report here.