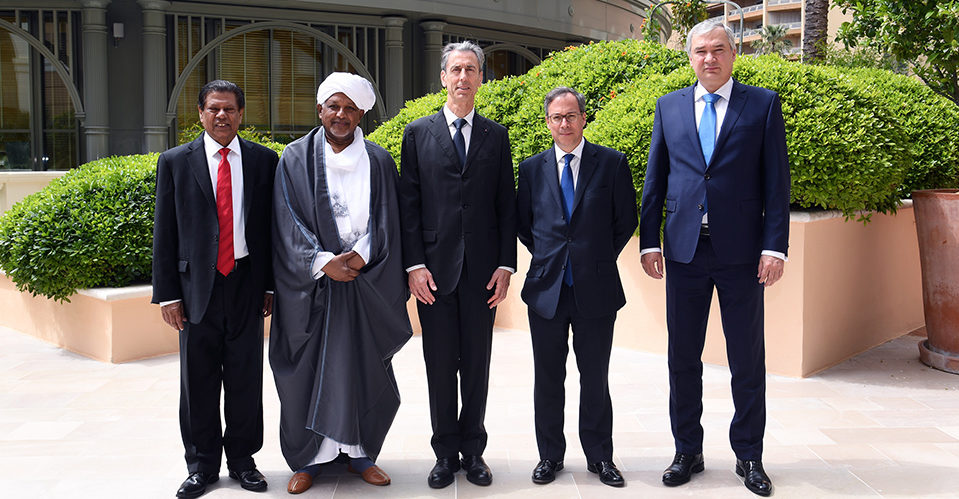 Lord Llewellyn, was appointed Personal Adviser to the Governor of Hong Kong in 1992, having worked for four years in the Conservative Party’s Research Service. In 1997, he joined the Office of the High Representative in Sarajevo, where he became Director in 2005, after spending three years in the office of the European Commissioner for External Relations. For five years, until 2010, he was personal Chief of Staff to Prime Minister David Cameron, also an Old Etonian. He became Ambassador to France in November 2016.

Mr Latushka joined the Ministry of Foreign Affairs (MAE) in 1995 and then joined the Consulate General of Belarus in Poland as Vice-Consul. In 2000, he became Director of the Department of Information and Spokesman of the Foreign Ministry, and was promoted Ambassador to Poland in 2002. From 2009 to 2012, he was Minister of Culture.

Mr Ranaviraja began his career in the Ministry of Cultural Affairs and was appointed Director of the Ministry of Public Administration. In 1983, he joined the MAE as Director General and then joined the Embassy of Sri Lanka in the United States. From 1995 to 2004, he held the position of Permanent Secretary in the Ministries of Media and Communication, Health and Indigenous Medicine, Social Security, and the Mahaweli River Basin Development.

Mr Ali Osman joined the Foreign Ministry in 1980, where he held various positions, and in 1996 he was appointed Ambassador to the Permanent Mission of Sudan to the United Nations. In 2001, he was promoted to Director of the Department of International Organizations at the Ministry of Foreign Affairs. He then held the post of Ambassador successively in Bangladesh, Pakistan, Jamaica, Cuba and the United Nations in New York. In 2014, he became Director General of the Departments of Environment, Human Rights and Water at the MAE, then Director General of the Departments of Bilateral and Regional Relations.

Prince gives lunch at Residence of the State Minister