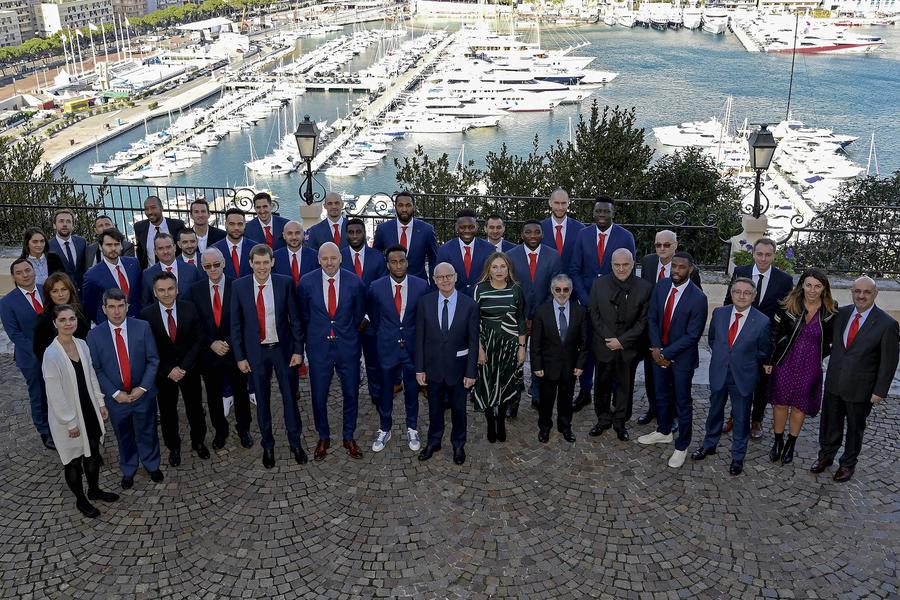 The Roca Team and the Ministry of State paid tribute to basketball great Kobe Bryant during a luncheon on Tuesday.
Minister of the Interior Patrice Cellario, President of AS Monaco Louis Biancheri and the President of the Monaco Basketball Federation Roland Biancheri joined the Roca Team for a lunch earlier this week to celebrate a communications partnership agreement recently forged between the Prince’s government and the AS Monaco Basketball team.
The team, ranked 2nd in the Jeep Elite and 3rd in the Euro cup standings, signed the agreement at the start of the 2109-2020 season.
At the lunch, Minister of State Serge Telle expressed his support of the Roca Team and joined them in mourning the loss of Bryant.
“I am very happy to welcome you all and to spend this moment with you. Very moved too, because this lunch comes at a particular time for basketball, with the death of the huge basketball player and the great man that was Kobe Bryant. This news touched the whole world. It affects us all. This tragic accident also reminds us of how fragile everything is and encourages us to take better advantage of the beautiful moments we have. Going to see you play and supporting you whenever I can is one of those great moments. Seeing you winning and wearing the colours of Monaco in France and in Europe is one of these beautiful moments. And having lunch with you today is one of those beautiful moments. Monaco is more than ever proud to have you and proud to support you,” he said in his speech.
Kobe Byrant was the five-time NBA winning champion shooting guard for the Los Angeles Lakers from 1996 to 2016. He earned the title of NBA Most Valuable Player in 2008, was an NBA Finals MVP twice in 2009 and 2010, and was the youngest player, at age 34, to reach an astounding 30,000 points in his career. He also was a two time Olympic gold medal recipient and an Academy Award winner for his 2018 animated short Dear Basketball.
He was killed last Sunday in a helicopter crash that also claimed eight others, including his 13-year-old daughter Gianna.