The Twelve Beers of Christmas

The American Club of the Riviera (ACR) celebrated Christmas on Saturday with lunch at Pastry Plaisirs in Nice. But before tucking into spinach and walnut homemade ravioli, drizzled with the chef’s signature gorgonzola cream sauce, a dozen members visited the new microbrewery in Nice, Allez Hops! at 15 rue Defly, open since the summer by ACR Governor, Daniel Deganutti.

Allez Hops!, which is not a bar, sells over 200 varieties of bières artisanales, with an average price of €3 a bottle (and the most expensive sells for €24). For holiday gift suggestions, the have their own brew, Christmas Bleue, or for €56, you can pick up The 12 Beers of Christmas. Alternatively, you could organise a themed tasting for a group of friends.

The hour-long tasting provides plenty of engaging commentary by Mr Deganutti on the local breweries and brewers and state of the local marketplace, as well as tips for serving beer – 4°C for lager to 13°C for darker beers – and suggestions for pairing with food.

“With winemaking, the most important aspect is the terroir,” Mr Deganutti explained to the ACR enthusiasts. “The fundamental environment of the vine, like the soil and weather, allows the grape to bring out the flavour of the terroir. But beermaking is different. In fact, it’s like cooking. You create a distinctive and pleasant taste by adding to the main four ingredients – hops, grain, water and yeast.”

Mr Deganutti told Monaco Life, “I had the idea for the micro-brewery three years ago at Thanksgiving and did my research. There are a dozen artisanale breweries operating in the Alpes-Maritimes but only one other microbrewery in Nice, near Liberation. We’ve had a great response, with all types of people coming into the shop, from students to bière artisanale connoisseurs. Of course, the French love to learn about the different types of beer.”

A reminder to ACR members that lunch and AGM will take place on Saturday, January 21 at Le Mayssa Beach restaurant in the port of Villefranche-sur-Mer.

Local News Staff Writer - November 25, 2018
In his speech, the Ambassador presented to his guests the guidelines of the foreign policy of the Prince's Government. 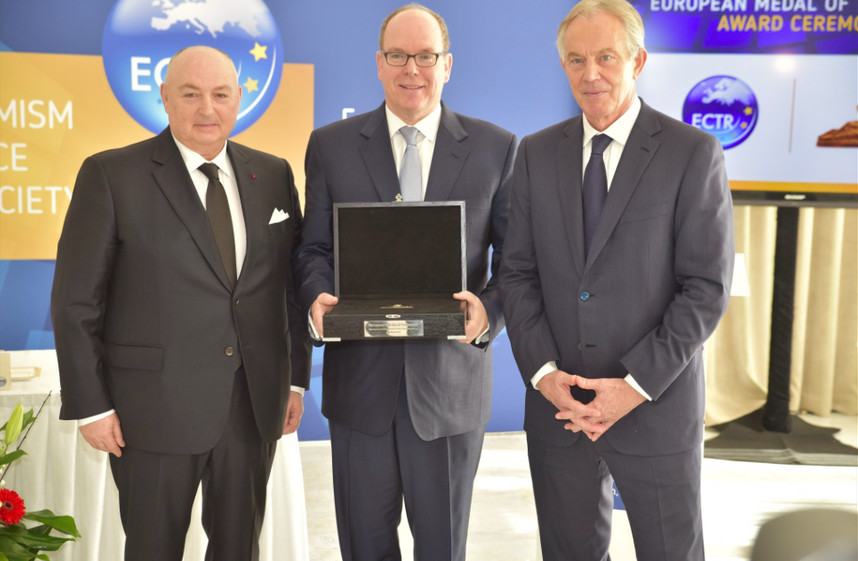 ECTR President Dr Moshe Kantor, Prince Albert and ECTR Chairman former UK Prime Minister Tony Blair. Photo: Twitter ECTR[/caption] The European Council on Tolerance and Reconciliation (ECTR) awarded its 2018 European Medal of Tolerance to Prince Albert on Tuesday, March 6, for his commitment to truth, tolerance and historical reconciliation. ECTR President Dr Moshe Kantor and ECTR Chairman former UK Prime Minister Tony Blair presented the medal to Prince Albert at the ECTR's first roundtable held in Monte Carlo, from March 5 to 7, to address the threat of radicalisation and issues surrounding the challenges to tolerance in European societies. On presenting the honour, Dr Kantor said, "The European Medal of Tolerance is awarded to you because of exceptional personal leadership and inspiration to advance truth, tolerance and historical reconciliation. You have found the courage and political wisdom to openly address painful history and difficult memories." In 2015, Prince Albert acknowledged Monaco’s rounding up and deportation of 66 Jews in 1942. Dr Kantor added, "Your Highness' gesture of supporting historical truth and unveiling a monument commemorating deported Jews in World War II has been such a liberating act of contrition, all the more impressive because it concerned not only among your own people, but also because of your own family's political responsibilities for the course of events." [caption id="attachment_29024" align="alignleft" width="371"] 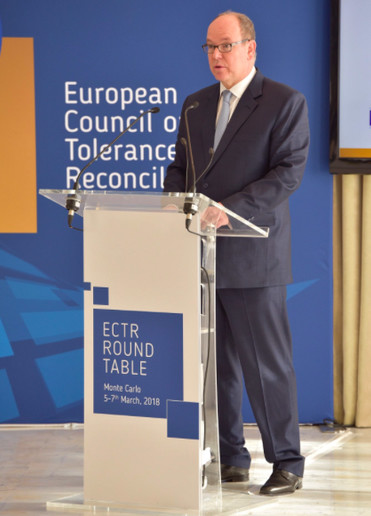 Photo: Twitter ECTR[/caption] Upon receiving the award Prince Albert said, "The promotion of international tolerance, reconciliation and education for which we must work are, in my view, of paramount importance in order to build a balanced world showing solidarity. "I am particularly touched by the recognition that you are honouring me with and I would like to thank you very much. As Head of State, I will ensure that my actions continue to be worthy of the trust you have shown me today." The ECTR is an opinion-making and advisory body on international tolerance promotion, reconciliation and education, and fosters understanding and tolerance, educates towards reconciliation, facilitates post-conflict social apprehensions, monitors racism, antisemitism and xenophobia and proposes pro-tolerance initiatives and legal solutions. Among its prominent members are Tony Blair, ECTR Board Chairman, Jose María Aznar, former Prime Minister of Spain, Göran Persson, former Prime Minister of Sweden, VairaVike-Freiberga, former President of Latvia and Rita Süssmuth, former Speaker of the German Bundestag. Founding member of the ECTR was the late Vaclav Havel, one of the principal leaders of the democratic transformation in Central Europe. (Source: ECTR) Article first published March 6, 2018.