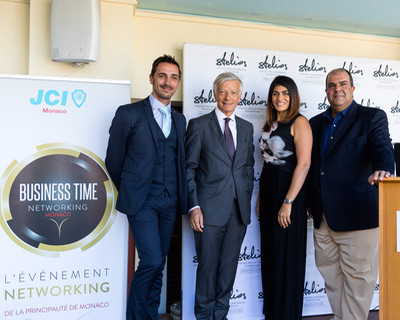 A Business Time Networking Cocktail hosted by the Monaco Junior Chamber of Commerce (JCEM) on Thursday, June 29, was, as the organisers had promised, “an unforgettable event”.

It was the first time the association held Business Time Networking, what JCEM President Olivier Mura described as “chosen subjects in chosen locations”, completely in English and, for many of the 180 attendees, it was a first-time visit to Stelios’ sprawling portside terrace.

Organised by JCEM’s Director of Business Network Events Laetitia Mikail, a solicitor at Moores Rowland who is both well-connected and highly regarded, the cocktail-conference on Entrepreneurship and Philanthropy brought many fresh faces to the English-speaking networking circuit, a feat not unnoticed by Sir Stelios, amongst others, who welcomed the opportunity to network with new business people.

Two speakers addressed the audience for ten minutes. Mr Michel Bouquier, Head of Monaco Private Label and Senior Advisor at the Ministry of Finance and Economy, presented the history of Monaco Private Label. The invitation-only ultra-exclusive membership was the idea of the former head of Monaco Tourism to give young, wealthy and respectable families the red carpet and show what Monaco has to offer.

Monaco Private Label, which has no website, allows 1600 family card holders from 46 countries, 7 days a week contact, from subjects as varied as medical to leisure. “Reactiveness is key,” stated Mr Bouquier.

Monaco Private Label believes that networking is part of philanthropy and unites members through global challenges, including support of the Prince Albert II of Monaco Foundation.

Sir Stelios Haji-Ioannou, founder of the Stelios Philanthropic Foundation and Chairman of easyGroup, also spoke, reminding the audience it was thanks to a loan from his wealthy father that he was able to get easyJet off the ground at the age of 28, and that this would have been much harder to do on his own.

Stelios, the first Monaco resident to commit to the Giving Pledge (“Let me make clear that I am not leaving half my fortune to Bill Gates…”), talked about Entrepreneurship and the 1,000 registered trademarks within the Easy Group, and the importance of using the Easy name within the trademark sector.

In the first half of 2017, the Easy Group had a competition with a £10,000 prize for best “easy” ideas. Five submissions were chosen – easyDogwalker, easyGuidewalker, easyGift, easyTennis and easyConveyance – and Stelios hinted that another contest may take place in 2018.

The founder of the Gustavia Yacht Club then addressed Philanthropy. His Foundation supports scholarships and charities in four countries “close to home” – Monaco, the UK, Athens and Cyprus. The Foundation also supports a program in the UK, a £50,000 incentive for a handicapped entrepreneur.

The Junior Chamber of Commerce is a non-profit organisation that counts 200,000 members, between the age of 18 to 40, worldwide. More than 120 countries are involved, forming 5,000 local chapters that embrace the group’s mission to provide development opportunities to empower young people to create a positive change in our world.

Local News Stephanie Horsman - February 8, 2021
A new exhibition by renowned Japanese artist Shimabuku is bringing a touch of the East to the Principality with 'The 165 Metre Mermaid and Other Stories' at the New National Museum.

A former executive at Monaco-based Unaoil will not be extradited to the UK to face corruption charges, according to a report by MLex, the reputable media outlet specialising in financial coverage. A court official allegedly told MLex that Prince Albert rejected a request by UK fraud prosecutors to extradite Saman Ahsani, Unaoil's former commercial director, following an "adverse opinion" from Monaco's Court of Appeal. The ruling can't be appealed, a court official said. The allegations against Mr Ahsani were not liable for criminal prosecution under Monaco's laws at the time they were alleged to have occurred, the official added. The decision was made on February 28, but had not been made public until now. Mr Ahsani has not been charged with any offence and has denied wrongdoing. The UK had opened a criminal probe into Unaoil to investigate suspected bribery, corruption and money-laundering two years ago following allegations in the Australian press.