Clement was greeted in Monaco by a swathe of Covid cases and the absences of key players. One could therefore be fooled into thinking that little can be deduced from the drab draw at a drenched Beaujoire stadium.

The way in which Clement reacted in light of these challenges, however, is revealing in itself. Rather than pigeonholing players in certain positions, Clement approaches the game in terms of the role that players fulfil, and their suitability to that role based on their attributes.

This explains the introduction of debutant Vanderson in a slightly more advanced right-midfield berth, often functioning within the half-spaces. More strikingly, however, was the deployment of resident left-back Caio Henrique in the number 10 role. 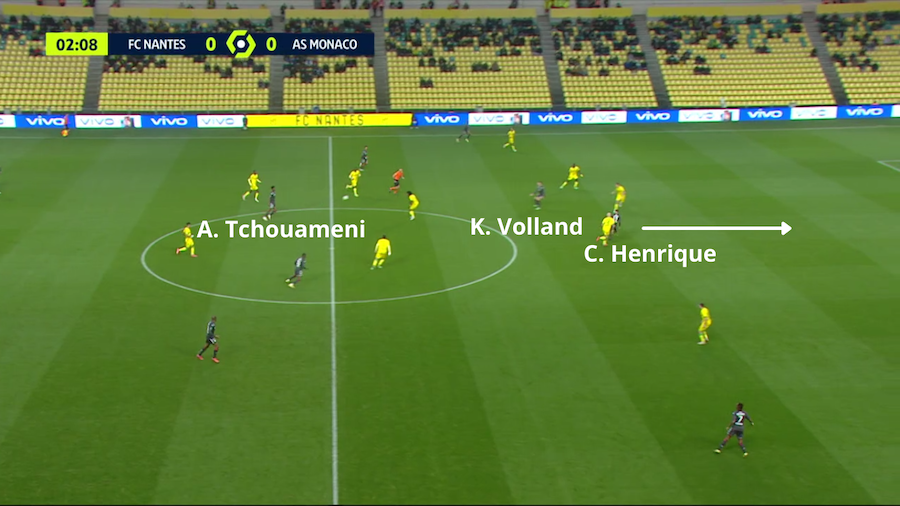 Although the jury is still out on Henrique’s suitability to the role relative to other candidates, and it remains to be seen whether this was simply a short-term fix to Monaco’s injury crisis or a more long-term adjustment, the Brazilian gave a positive showing.

Particularly in the first-half, Henrique was an ever-present option for progressive passes. He manufactured space nicely in between the lines and often came to feet. More interestingly and encouragingly, he showed a great understanding with Kevin Volland.

As shown in this extract from the game against Nantes, Henrique was equally as adept at making runs off the shoulder of the last man and in behind the defence. Although he didn’t receive the required service to make this count, the understanding of the role was there.

What was most striking was how Volland and Henrique almost always correctly interpreted the intentions of the other. When Volland made a run in behind, Henrique would show to feet and vice versa. In the above example, Volland was the option to feet, whilst Henrique ran in behind to attempt to get on the end of Aurelien Tchouameni’s ball over the top.

Henrique is not completely unfamiliar to the role. He has played in the number 10 during his formative years and also during his time at Atletico Madrid, and this showed in his understanding. His partnership with Volland, and the way in which they worked in tandem, would certainly have encouraged Clement, and whether it is used as a long-term solution or not, he certainly shouldn’t be discouraged from deploying the duo in those roles in the future. 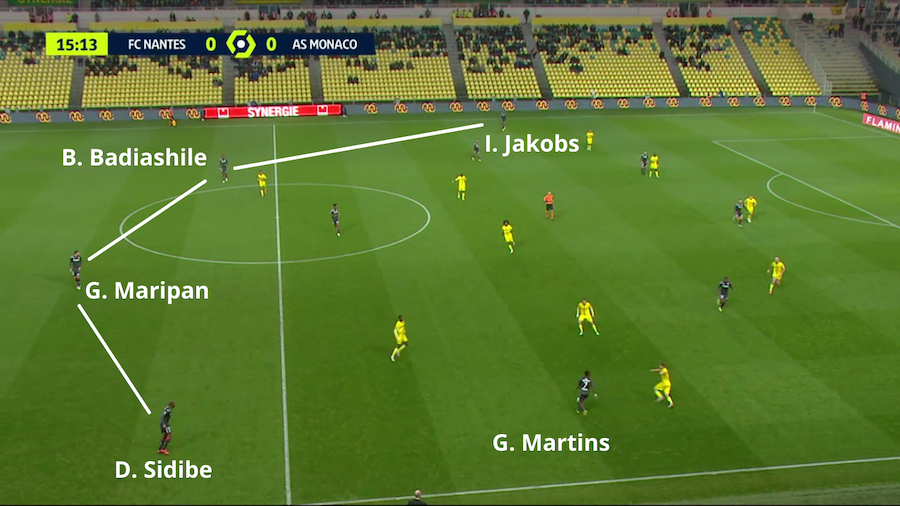 Perhaps the most distinguishable of all the tactical decisions made by Clement was his utilisation of an asymmetrical back four. Ismail Jakobs height up the pitch as well as his width provided a constant switching outlet, whilst also providing more room for the effervescent Sofiane Diop to exploit the half-spaces.

In stark contrast, Djibril Sidibe tucked in narrower and deeper. Gelson Martins was the outlet down the right who provided the width, whilst Sidibe would sometimes provide an underlapping run to provide attacking momentum.

Although there were some nice interchanges between Martins and Sidibe, the Jakobs-Diop partnership bore more fruit. Particularly in the first-half, the width provided by Jakobs afforded plentiful room for Diop in the half-spaces that he duly exploited. The performance of the France U21 international was another signal of his continued progression as he becomes a more rounded player. Niko Kovac can certainly be given a lot of credit for this, whilst the excellent attitude of the player is seeing him become a more consistent performer and a key member of AS Monaco’s attacking unit.

Tactically, little changed when Sidibe went off injured mid-way through the first-half. Ruben Aguilar continued to sit deep and narrow, and Martins was the principal source of progression down that side.

Jakobs’ unrelenting natural fitness allowed him to get back into shape as soon as the ball was lost, as he quickly joined a flatter, more conventional back-line. 41% of Nantes’ attacks were focused down Sidibe/Aguilar’s side despite the fact that, given the huge gap between Jakobs and Benoit Badiashile, most of the space should theoretically have been on the other side. This shows just how quick Jakobs was in re-joining the rest of his back-line. 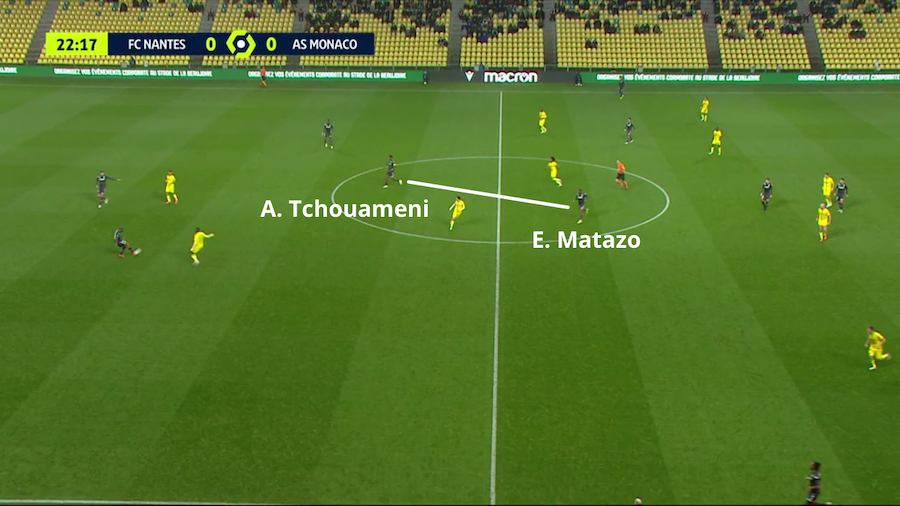 Tchouameni was the standout performer on Sunday. On a visual inspection he looked dominant and metronomic in his role in the midfield pivot alongside Eliot Matazo. The statistics back this up too. The France international midfielder registered a series of season-best statistics including most progressive passes, most carries, most touches and most attempted and completed passes.

This was, in part, facilitated by a tweaking of the double pivot partnership. Accustomed to a more horizontal pivot, Tchouameni and Matazo played more vertically on Sunday, facilitating simple progressive passes. This was shown in their average position at the end of the match as the two players almost overlap, with Matazo on average playing just slightly higher, but no wider than his teammate.

Tchouameni was therefore more often the deeper of the two. This allowed him to fully utilise his range of passing from more unpressured areas of the pitch, whilst also providing opportunities for his teammates to easily recycle the ball through him and once more build through the phases.

It was largely thanks to this unconventional pivot that AS Monaco managed to control the match, with a dominating 69% possession throughout the game. Matazo was also impressive, and whilst Youssouf Fofana should be back in the matchday squad against Clermont Foot, he may find it difficult to displace the young Belgian.

Speed and verticality in transition

Perhaps the most exciting tactical characteristic of Clement’s debut was the dynamism in the transition. Staying true to Kovac’s philosophy, Monaco pressed high and with intent in the first-half in particular. The three injuries and perhaps just a lack of natural fitness amongst some of the returning players, meant that this wasn’t replicated in the second-half.

Some of the pressing patterns that AS Monaco fans were accustomed to seeing under Kovac were once again evident here. In particular, Monaco recognised the opposition full-backs receiving the ball as a pressing trigger, and would quickly condense the space and commit players to the press.

Once the ball was regained, Monaco would then quickly spring an attack, the verticality and the speed of which was problematic for the opposition, who had not yet had the time to reset. With more drilling and a higher level of fitness amongst the squad, this style of transition play has the chance of being a great source of attacking threat for Monaco.

The first-half of Clement’s debut offers a lot of promise going forward, and although a slightly more lethargic second-half display may linger more in the minds of fans, it is important to remember the difficulty in the preparation of the game. There are already enough positive signs to hint that Monaco are in a good position to fight for the Champions League places.

Get a move on Sunday at Stars’n’Bars

As part of its Eco-Hub movement, launched in June of this year, Stars’n’Bars continues its monthly workshops on nutrition and wellbeing with its first “Wellness with Movement” day, Sunday from 11 am to 7 pm at StarDeck. Free participation for all ages this weekend, events will include Kids Zumba, Bollywood, Pop Pilates, Posturo-Therapy, Pole Fitness, Yoga Digestion and Anti-age, Qi-Gong and Ski Fitness. Dress code: comfortable! In October, EcoHub hosted,“Beauty Inside and Out”, an all-day fair focusing on how to be beautiful and healthy using natural methods and products, while “respecting the environment and the body’s natural needs”. And later, they promoted better health with a cancer prevention talk with Henri Joyeux, a professor of cancer treatment and surgery, and a conference on lifestyle and beauty. READ ALSO: The Women of Monaco Life, A Series: Kate Powers