Home Sports Another win for Ogier at Monte-Carlo Rally

Another win for Ogier at Monte-Carlo Rally 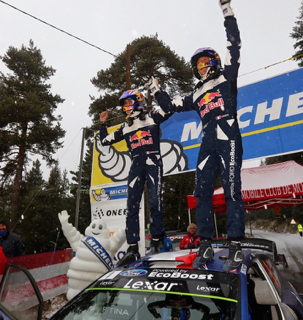 Sebastien Ogier won the Monte-Carlo Rally on Sunday, his 39th race win and a first for his new team, M-Sport.

It was the 33-year-old Frenchman’s fourth consecutive win in an event he has said is his favourite of the season.

Mr Ogier praised his team on Twitter: “To win with @MSportLtd at the 1st race after 1 month of preparation is amazing! Thank you so much to the team, you deserve this victory” added, “It doesn’t mean the season will be easy, we know we have to keep working hard, but at least we start with a lot of points so we’re happy!”

The competition was marred by the death of a spectator during the opening stage, hit by a car that left the road. According to police reports the man had been standing in a forbidden zone.

The Red and Whites have gone three for three, starting the second half of the Ligue 1 season with a three-two win against Montpellier on the opponent’s home turf.

Boris Herrmann has hit a patch of doldrums in the Atlantic during this late stage of the Vendée Globe, saying that “the sea and sky are messy.” But progress is still being rapidly made.

Sports Staff Writer - March 17, 2017
After losing 5-3 to Man City on February 21, AS Monaco came back with a 3-1 win Wednesday night to advance to the Champions League quarterfinals. There had been some doubt as to the team’s performance as top goal scorer Radamel Falcao was out with injury and top defender Kamil Glik had to sit the match out with a suspension. "Falcao out, Glik out. Not many people thought we had a chance to qualify," Monaco coach Leonardo Jardim said. "I always defend Ligue 1. France has good teams, good players, good managers." Father Walter Raymond of St Paul’s Monte Carlo is a long-time supporter of ASM, and was at both games against Man City. “The first halves, in both matches, were really exciting with Monaco scoring two of their total three goals before the halftime break. Monaco's lead at the halftime in Manchester gave a false sense of security. City came back to win that match 5-3. So I was more than a bit wary last night at the half, and with reason. “Sure enough City came out like a powerhouse with Sané scoring what by then seemed an inevitable goal, City was so strong, taking the overall lead at the 71st minute. But AS Monaco was not easily put off, and I've never heard the fans more unified and focused, cheering like crazy. So with the 12th man (the crowd) pushing Monaco on, Bakayoko came back only 6 minutes later to score ASM’s third and ultimately winning goal. What a terrific win! And now for the quarterfinals!” This is the first time in eight tries that Man City coach Pep Guardiola failed to reach the semi-finals of the Champions League and insisted “the game plan would have been right if his players had executed it properly”. “We played exceptionally in the second half but we forgot to do that in the first,” Guardiola commented. “We wanted to defend aggressively. We were better in the second, but it wasn’t enough. “I came here to win the Champions League. I tried. I tried. And I will try again. Playing like we have done this season, like in the second half, would have been enough." Man City has the honour of being the first club in Champions League history “to score five goals in the first leg and be eliminated from a knockout tie”. "Hopefully we are going to learn so that next season we can come back here and make the same performance we did at the Etihad for the whole 90 minutes." [caption id="attachment_13852" align="aligncenter" width="960"] 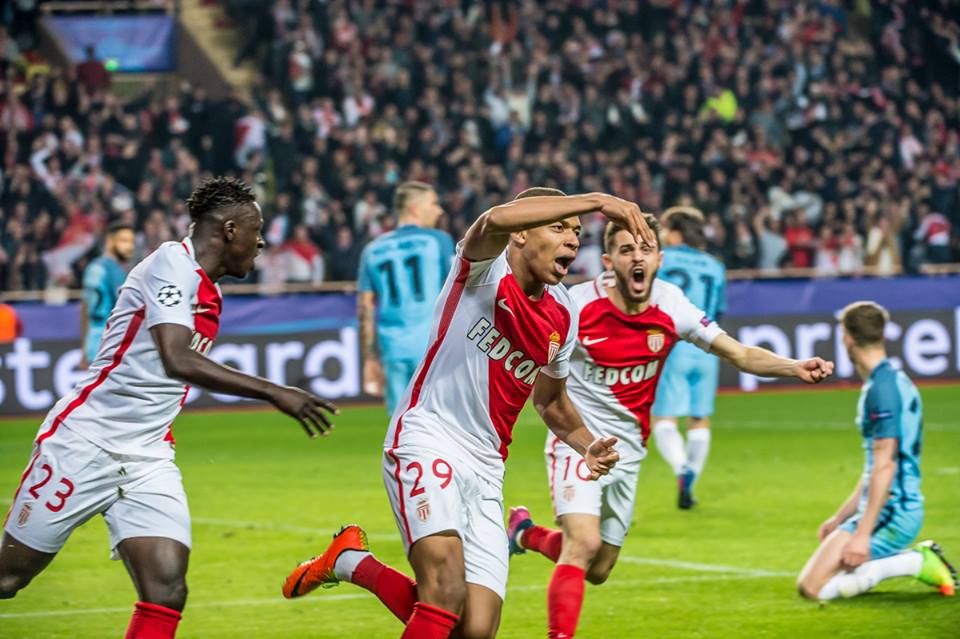 Photo: Facebook AS Monaco[/caption] In the first half of Wednesday night’s match, Monaco dominated with a 2-0 lead, with goals by Mbappe (8') and Fabinho (29'). Man City came back a little too late in the second half, with Sané scoring at the 71-minute mark but Monaco’s defensive midfielder Bakayoko was able to “head home” the third goal at 77 minutes. "I thought if we scored three we would go through and the players had that in mind," Jardim said. "English teams have suited us well in the last couple of years. We knocked out Arsenal (in the Round of 16 in 2015) and we beat Tottenham twice this season (in the group stage)." Unbeaten in the last nine home games in all competitions, Monaco has scored 126 goals this season, and is now the only French team still in contention in four competitions: Ligue 1, Champions League, Coupe de la Ligue and Coupe de France. Playing to a nearly full capacity at Stade Louis II, including HSH Prince Albert, fans of The Reds and Whites chanted "Le stade avec vous" (The stadium's with you). The quarterfinal draw Friday put Monaco against Borussia Dortmund, with the first leg in Germany on April 11, and the final match in Monaco on April 19. Friday's draw also put Atlético Madrid versus Leicester City, Bayern Munich against Real Madrid, and Juventus taking on Barcelona. Article first published March 16. 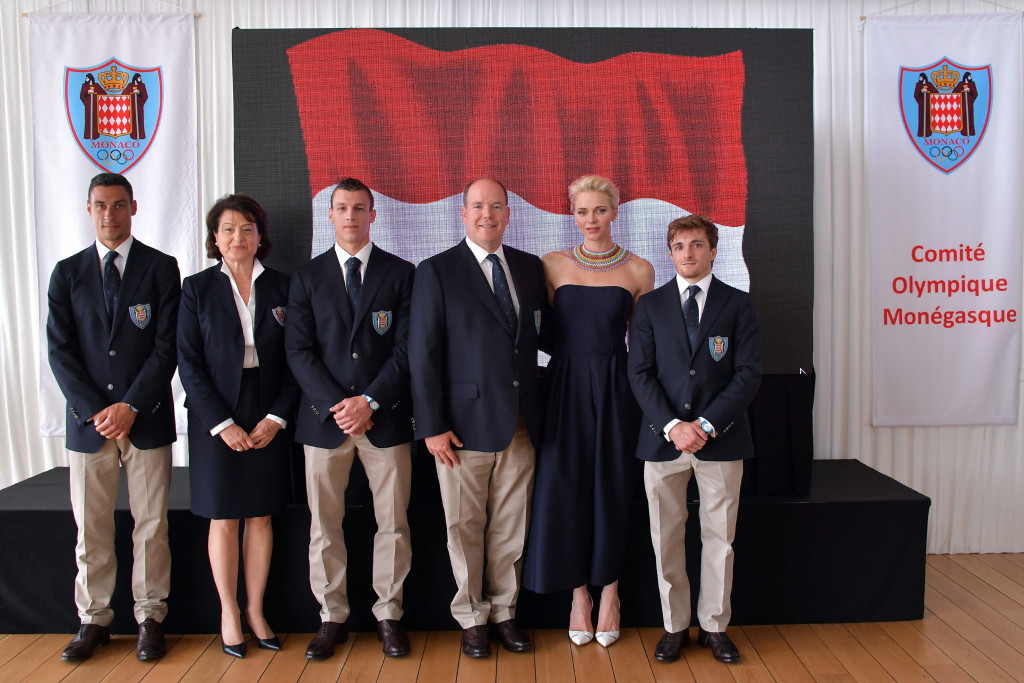 L-R: Brice Etes, HE Ms. Lambin-Berti, Secretary General of the Monaco Olympic Committee, Kevin Crovetto, HSH Prince Albert II, HSH Princess Charlene and Yann Siccardi. Photo: © Charly GALLO[/caption] With the start of the Rio Olympics just days away (Read: Monegasque Olympic team arrives in Rio), this is a busy time for HSH Prince Albert, a leading member of the International Olympic Committee and a former Olympic athlete himself. The World Olympians Association, whose head is Joël Bouzou of Monaco’s Peace and Sport association, has announced that its Patron, HSH Prince Albert, International Olympic Committee Vice-President, Nawal El Moutawakel and EY Global Chairman and CEO, Mark Weinberger will launch the Olympians Reunion Centre by EY in Rio de Janeiro ahead of the start of the Olympic Games. The three will join WOA President and four-time Olympian Joël Bouzou in declaring the venue open at a special gala on August 4, according to Olympics news website aroundtherings.com. Co-hosted by the WOA and EY, the ORC is the destination hub for Olympians of all ages to gather in the heart of the Olympic action in Rio. The opening gala, which takes place the day before the Rio 2016 Opening Ceremony, will bring together prominent and influential Olympians and other high-ranking guests from across the Olympic Movement to celebrate the launch of the ORC and help usher in a fortnight of thrilling Olympic sporting action. Prince Albert said: “It will be a great pleasure to officially open the Olympians Reunion Centre by EY at the Rio 2016 Olympic Games. I am looking forward to gathering with my friends and colleagues from the Olympic Family at this fantastic venue and celebrating the role Olympians play as ambassadors of the Olympic values.” WOA President Joël Bouzou said: “We are truly honoured to have our Patron, HSH Prince Albert II, and inspirational Olympian, Nawal El Moutawakel, help us launch the Olympians Reunion centre by EY in Rio on 4 August. As we count down the days till we welcome Olympians from all over the world to the ORC in the remarkable Olympic city of Rio, we are grateful for the support of our presenting partner EY and we look forward to an amazing opening party and an incredible Olympic Games.” EY Global Chairman and CEO, Mark Weinberger, added: “As proud partners of the Olympians Reunion Centre in Rio we are looking forward to opening its doors to Olympians from around the world. The Olympic Games are an opportunity to build a better and more peaceful world through sport and the connections that unite us as a global community. Joining forces with the World Olympians Association to host the Olympians Reunion Centre – which is all about celebrating the legacy of Olympians and forging connections between them – represents the perfect opportunity to help us achieve those aims.”  Source: aroundtherings.com