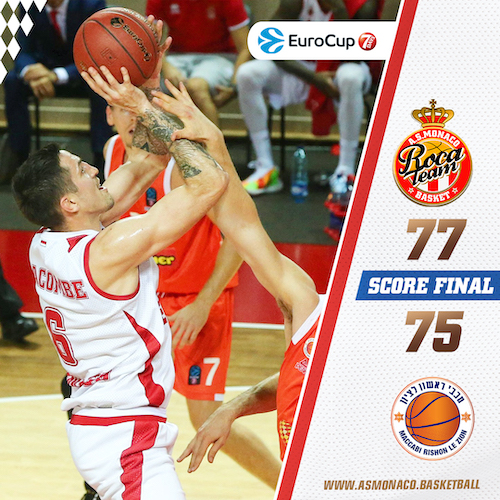 It was a nail-biter, but AS Monaco Basketball pulled off a big win on Wednesday night at Salle Gaston Médicin, ensuring their spot in the in the EuroCup Top 16.

The playoffs are now in the bag for Roca Team, but not without seriously having to work for it against Israeli basketball titans Maccabi Rishon at home. It was a close game from the start and both teams were ferocious in their determination to win.

The first half was a back and forth shuffle between the two teams, but Monaco managed to take a decent 40-33 lead by halftime.

Maccabi came out strong in the second half though, and after two three-pointers in quick succession, they nearly evened up the game. From them on, it was anyone’s to win, and up until the very last seconds it could have gone either way. Only a superb ball recovery by Will Yeguete, preventing a final shot by Maccabi, gave Roca team the definitive win.

Despite the win, the game was clearly a bit too close for comfort for team coach Sasa Obradovic who said after the game, “I like aggressive play, racing, flying, fast … We did not see much of that during this match. We will focus on the next, on these last two games without pressure and on this top-16 which promises to be very contested and exciting.”