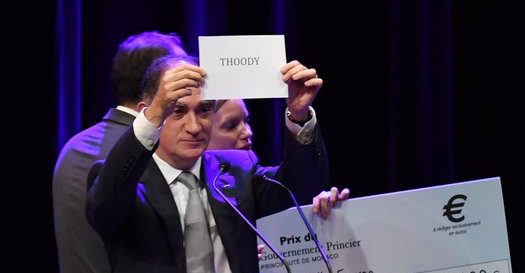 At the closing of the Monaco Business trade fair on Tuesday, November 15, Mr Jean Castellini, Minister of Finance and Economy, presented the Prince’s Government Award for the creation of a company, organised by the Junior Chamber of Economy of Monaco, to a young Monegasque.

The jury, composed of representatives from the private and public sectors, chose this year to support the business creation project entitled “THOODY”, led by Alexis Lanari and her future partner, both students at École Centrale of Lille.

The young winner will benefit from financial aid of €40,000 and the support of advisors and professionals who will be able to advise during the launch of the company.

The fledgling business concept is centred on developing mobile applications for all devices, for both individuals and companies. Initially, they will launch their product on the local market, then they want to quickly expand their company internationally. It is in this respect, in particular, that the Principality represents a real springboard for these young entrepreneurs, the Government said.

Mr Castellini congratulated all of the candidates who, this year again, had energetically carried out innovative and varied projects. He also emphasised the regular support given by the Government of Monaco to the initiatives of the Junior Chamber of Economy of Monaco.