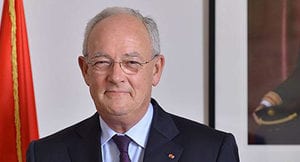 Monaco’s former Minister of State, Michel Roger, who suffered a stroke last December worked tirelessly in the interests of the Principality in the very demanding position of “prime minister” for a number of years. The 67-year-old remains in hospital in Poitiers almost 10 months after being taken ill at his residence in Monaco.

A local figure in the Principality, who saw firsthand how difficult post-stroke recovery can be, especially for those who were active community members, is calling on artists, amateurs or pros, in and around Monaco to create a portrait of Mr Roger.

The art piece can be a sculpture, a painting, an illustration, an interesting altered photography, a collage using all sorts of techniques and materials, and the portrait can be realistic or abstract.

A private vernissage for the all submissions is being planned but will need the support of a Monaco association. Prizes will be awarded and the winning piece, to be signed by Prince Albert, will be handed over to Mr Roger’s wife.

There are lots of photos of Mr Roger, who served in office from 2010 to 2015, online to inspire creativity.

The Michel Roger initiative was launched in January this year as a monthly support system for the former official, and many people in Monaco have already participated.

Culture Cassandra Tanti - May 1, 2019
Details of this year’s Celebrity Fight Night in Italy have been revealed and it is, once again, destined to be one of the nation's most exciting elite charity events of the year.

“It’s important to get the money into...

Culture Cassandra Tanti - June 24, 2020
Little did Brisa Trinchero know when she took over as CEO of the Princess Grace Foundation-USA that a pandemic would see her redirecting much of the Foundation’s awards money towards struggling artists.