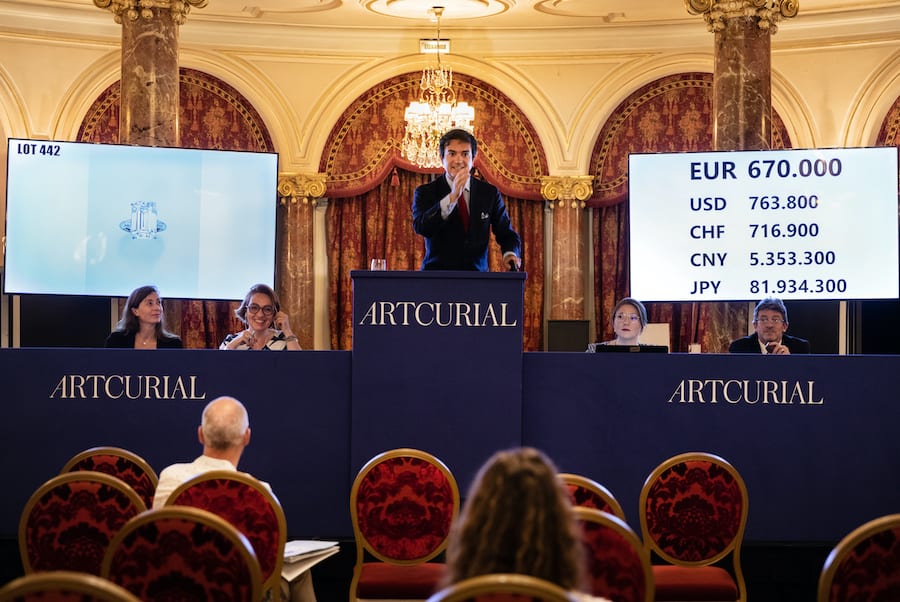 Artcurial has closed its summer auction week at the Hermitage Hotel with €14.1 million in sales of jewellery, timepieces, Hermès bags and classic cars, with many lots going well above estimate.
The week was marked by significant growth in watch sales (+ 26%) and the strong presence of foreign buyers. This year also saw the addition of 90 vintage cars to go under the hammer.
The Artcurial summer auction achieved a total of €14,143,974, with 10 lots sold above €100,000 and a number of classic cars sold for more than €1 million.
The auction drew foreign collectors from 29 different countries, all trying to outbid each other over the phone or in person at the Hermitage Hotel.
“Once again, thanks to its dynamism, its know-how and its professionalism, Artcurial has confirmed its leadership in Monaco,” said Louise Gréther, Director of Artcurial Monaco. “Hosted by the Société des Bains de Mer in a prestigious setting, these fine performances point to a promising winter season.”
Jewellery
There were two auction sessions dedicated to jewellery on Monday 20th July and a total of €3,216,900 in sales was achieved. Despite the uncertain climate, more than half of the lots were sold above estimate, including three lots above €100,000. They included two clips de corsage signed by Van Cleef & Arpels, one in gold and ruby which sold for €22,100 – nearly six times its estimate – while the second, a ‘Pirate’ clip in gold and enamel, sold for €23,400, or nearly 10 times its estimate. The trend continued with a Caesar compression estimated at €10,000 and sold for €58,500, confirming collectors’ unconditional attraction to Caesar and for artists’ jewellery in general.
Meanwhile, a ring adorned with an 8.73-carat oval diamond estimated at €15,000 sold for €106,600.
The highest price was paid for an emerald cut diamond of 10.42 carats, which went for €839,800 – double its estimate.
Timepieces and ‘Le Temps est féminin’
There were two separate sales on 19th and 21st July for time pieces and Le Temps est Féminin, which is dedicated to ladies’ watches. Together, they achieved a total of
€3,191,416 including fees. In all, 80% of lots were sold, an increase of 26% on the winter session.
The Bull Collection was at the heart of this success, with six auctions above €100,000, one above €200,000, and an average of €40,000. Patek Philippe, Rolex and Audemars Piguet dominated the sales with their three flagship models: Nautilus, Daytona and Royal Oak.
In the women’s watches auction, Cartier and Van Cleef & Arpels reaffirmed their positions by achieving the highest sale price with one in platinum and diamonds which sold for €72,800.
Hermès Summer Collection
On Sunday 19th July, the eagerly awaited three-day sale of the Hermès Summer Collection got under way, bringing together around 60 bags created by the iconic house of Faubourg, as well as five accessories by Louis Vuitton X Suprême. They brought in a total of €581,240, with the most unique models remaining very popular with collectors. The highest sales were seen in a Birkin 30 bag in Blue Jean Nile crocodile which went for double its estimate at €65,000.
“The enthusiasm for Hermès bags continues with a marked trend for small sizes,” said Alice Leger, Hermès Vintage and Fashion Arts specialist for Artcurial. “The range of colours and the quality of the skins on offer appealed to our buyers, far beyond French borders.”
Artcurial Motorcars
After four days of exhibition on Place du Casino and within the Museum of the Collection of HSH the Prince of Monaco, the first post-lockdown physical sale of Artcurial Motorcars was held in the heart of the Hôtel Hermitage. Collectors were able to come in large numbers to attend the auction led by auctioneer Matthieu Lamoure and Pierre Novikoff. The Artcurial Motorcars auction saw nearly €7.2 million in sales, with a 1955 Mercedes 300 SL Papillon with only 38,000 original miles selling for €1,416,000.
Meanwhile, a 1957 Mercedes-Benz 300 SL Roadster also won over several bidders and changed hands for €858,200.
“For this first physical auction after confinement, the majority of the stars of the Monaco sale have changed hands,” said Matthieu Lamoure, Auctioneer for Artcurial Motorcars. “The entire Artcurial Motorcars team is very happy to have exceeded its objectives by reaching an international clientele through indoor, telephone and online auctions.”