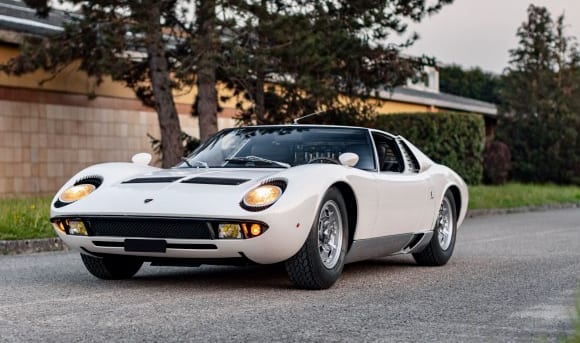 A 1968 Lamborghini Miura P400 took top honours at the Artcurial Motorcars Monaco 2021 collector car auction at the Hôtel Hermitage this week, selling for €977,400 to join a Monegasque collection.
Artcurial Motorcars returned to the Principality a year after its last Monegasque sale for an auction of collectors’ cars on 19th July. The sale, which pulled in a total of €6,556,652, was led by dynamic duo auctioneer Matthieu Lamoure and specialist Pierre Novikoff.
According to an Artcurial press statement, bidding was spirited in the room at the Hôtel Hermitage, on the telephone, and via the internet.
Before the sale, Artcurial Motorcars held three days of viewing, with all the cars displayed either in the Fontvieille marquee or the Musée de la Collection de SAS le Prince de Monaco.
Considered as one of the first supercars, the iconic Lamborghini Miura P400, a star of the sale, sold for €977,400 to join a Monegasque collection.
A 1965 Aston Martin DB5, preserved in original but non-running condition by its one owner of the last 42 years, changed hands for €506,600. Another desirable model, the 1973 Porsche 911 Carrera 2.7 RS Touring, one of only 16 examples delivered in aubergine, went for €484,000.
The Ferrari 512 BB that belonged to French singer Christophe sold for €168,000 to the sound of his hit ‘Aline’, sung by Matthieu Lamoure in homage to its illustrious owner.
“In a difficult context, we are delighted to have succeeded in holding a physical sale of high-quality automobiles, with public viewing of all 120 lots, in which collectors have distinguished themselves with passion and panache,” said Matthieu Lamoure, Managing Director of Artcurial Motorcars.
Amongst rally cars, the sole Peugeot 205 T16 in the blue and white Pioneer colours and the last example of 200 built, fetched €274,200.
Of the more modern cars on offer, the Mercedes Maybach G650 Landaulet, one of just 99 examples of this luxurious and exclusive model boasting a V12 6.5-litre 630 bhp engine, found a new owner for €646,100.
Finally, a 1966 Fiat Jungla, the perfect Riviera beach car, will continue to enjoy life in the Monegasque sunshine, selling for €28,600.
Artcurial’s next auction is scheduled for October in Paris.

Photo of the Lamborghini Miura P400 sold at auction, provided by Artcurial