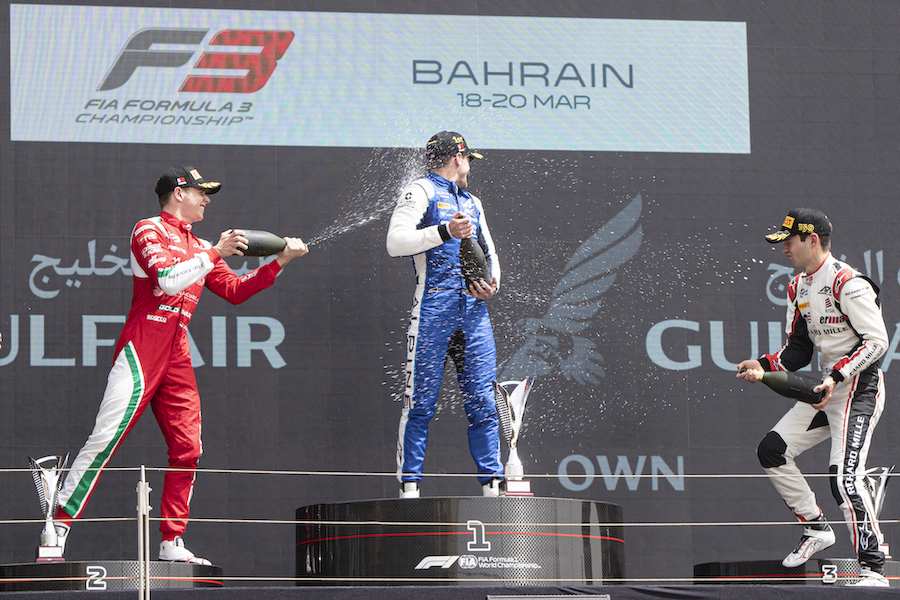 Charles wasn’t the only Leclerc to step onto the podium in Bahrain as his brother Arthur secured second place in Sunday’s F3 Bahrain Grand Prix.

Arthur Leclerc reaped the maximum from his PREMA car to secure the second place in the feature race, after a difficult qualifying had left him in the mid-field in 14th place. As the Monegasque driver stated at the time, his prospects for the opening race weekend seemed bleak: “It wasn’t the best qualifying for the team. We have been missing a bit of pace in every sector.”

With a lot of work to do to get into the points in the sprint race, Leclerc quickly set about his task, providing a brilliant display of overtaking as he weaved his way through the field. The best scrap he had was with rookie Gregoire Saucy, as Leclerc overtook the Swiss driver before losing the position on the following lap.

Their battle was prematurely ended when a collision between Saucy and his team-mate Victor Martins saw both drop back through the field. Leclerc took the gift and continued to move his way through the field, eventually finding himself in fifth position. A bold move down the inside of Zane Maloney on the penultimate corner of the last lap didn’t stick, and so the Monegasque driver had to settle for fifth, missing out on fourth by only a few thousandths of a second.

Leclerc’s rise through the field was even more spectacular in the feature race. A chaotic first lap, which saw multiple retirements, promoted Leclerc to eighth position, as he kept his nose clean before the safety car was deployed.

Turn one was where Leclerc wrapped up many of his overtakes, as his late-braking down the inside continued to reap rewards. It was this exact move that allowed Leclerc to get the job done on Franco Colapinto and take P2.

Martins’ superior pace kept him out of the clutches of the charging Leclerc as he took the victory. A second place for Leclerc, however, was a fitting reward for a remarkable, gritty drive from a difficult position.

“I am so happy about the result today. I think it’s the maximum we could do,” said Leclerc post-race.

Heading into the European stage of the season, which begins in Italy in late April, Leclerc is well-poised to challenge for the top spot, as he lies just one point behind championship leader Martins. The idea of two Leclerc world championships is a mouth-watering prospect, and one that is far from out of the realms of possibility.