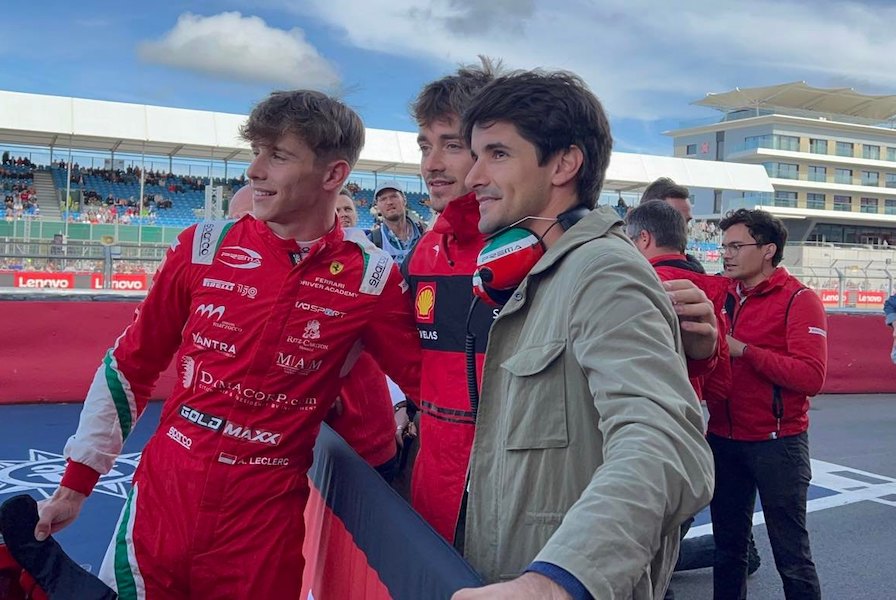 Whilst Charles Leclerc suffered another frustrating afternoon at the wheel of his single-seater Ferrari on Sunday, Arthur Leclerc succeeded where his brother failed by winning the F3 British GP.

Victory for Arthur takes him to second and within just six points of F3 championship leader Victor Martins. Post-race, the young Monégasque was congratulated by his brothers (Charles and Lorenzo), who both watched Arthur take the chequered flag at the iconic circuit.

Arthur looked racey from the offset. Having got a less than ideal launch, he was forced to defend his second position during the opening corners, but having done so, he immediately launched an assault on Zak O’Sullivan’s Carlin.

The Prema driver attempted an audacious move around the outside of Stowe corner, but after pulling it off, he was forced to give the position back as the safety car had been brought out midway through the move.

Leclerc did then take the lead on lap six with a move around the outside of Brooklands, which gave him the inside line heading into Luffield, allowing the move to stick.

Whereas a late safety car undid Charles’ race in the afternoon, as the Monégasque moved from a race-winning position to outside the podium places, Arthur remained unfazed. As he had since the beginning of the race, he held position with good pace and zero errors.

Behind him, O’Sullivan and Prema team-mate Oliver Bearman, both hoping to clinch second place in their home grand prix, had a spectacular late tussle all the way to the line. As the two went side-by-side into the final corner, it was O’sullivan who held position by just 0.051’s of a second.

Post-race, Arthur Leclerc said, “I’m really happy about the win, we gave everything. Finally, a good weekend from beginning to end. We had a good qualifying and started on the front row. It was a hard race to keep it in front, we had a lot of degradation with the rear tyres. I was struggling quite a lot with the tyres but in the end, we made it to P1. Now on to Austria.”

With wind in his sails, Leclerc will hope to carry his form into Austria next weekend, where the Prema and Ferrari academy driver could very feasibly take the lead of the F3 championship.