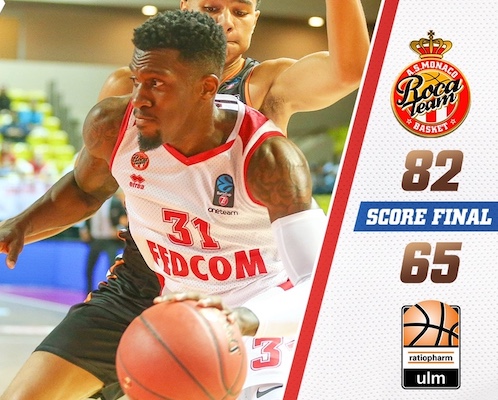 After losing two in a row, Roca Team got their mojo back and won a decisive 82-65 victory over Germany’s Ratiopharm Ulm at the Salle Gaston Médecin.

After a rocky first half start which saw the Roca Boys head into the locker rooms behind their German opponents at the break, they came back in the second half with fire in their bellies.

An early slam dunk by Wilfred Yeguete, followed by a quick succession of baskets forced Ulm to call a timeout to stop the haemorrhaging. Ulm countered with some impressive ball handling, notably by American Killian Hayes, who scored 15 points on the night, but it wasn’t enough to stop the offensive onslaught.

Anthony Clemmons made a fantastic shot behind the arc, and due to a bit of rough play by opponent Dee Bost, he was sent to the free throw line, where he converted the shots to points. The points just kept coming after that, and when the buzzer went, Roca Team had their win.

“Our confidence was affected by our previous two games,” said As Monaco’s coach, Sasa Obradovic. “We were not precise in the systems and we did not communicate enough. It was in the fourth quarter that we played as we should, with a big defence at the base. Now we are already focused on the next game.”

As Monaco Basket’s next challenge will be Saturday, when they face Strasbourg in the Jeep Elite at home.