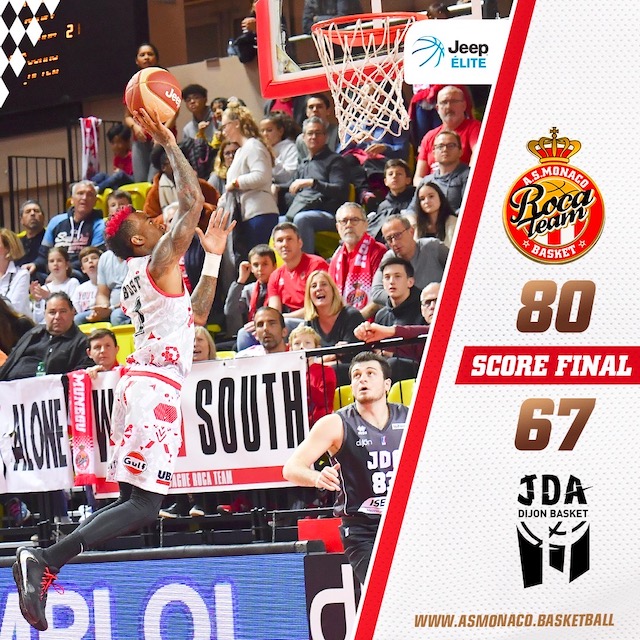 AS Monaco dominated the court against Dijon to a crowd of nearly 2,400 fans at Gaston-Médecin on Saturday night.

The Roca team has taken back control and are at the top of the Jeep Elite standings after a smashing 80-67 victory against Dijon.

Monaco was in it to win it from the start. The return of their supporters, who had not been allowed to attend the last game due to Covid-19 fears, urged them on and gave them wings. They took advantage of the renewed vigour and came out swinging.

After only eight minutes, the Roca team was up 17-7 with amazing plays by team captain Dee Bost and American superstar Norris Cole showing their stuff. By the beginning of second quarter, Yakuba Ouattara got in on the action with a superb three-pointer, keeping the 10 point lead in check.

Dijon weren’t about to roll over though and came back with fantastic shots from Axel Julien and Saulius Kulvietis, almost evening the score by the 13th minute. For a brief shining moment, Dijon took the lead, only to see another Monaco onslaught, putting them at 41-33 at halftime.

After the break, Dee Bost opened the scoring and set the pace. Despite some sloppy ball handling, the Roca Boys stayed firmly in the lead.

Dijon’s frustration came through when coach Laurent Legname was handed a technical fault, followed by two more for Julien, who was asked to end his game early.

Anthony Clemmons made a tremendous three-pointer not long after and the score sat at 65-53 at the end of the third quarter. There was no letting up after that and Monaco went onto a 80-67 victory, with four players. Cole, Bost, Ouattara and Clemmons, earning 12 or more points on the night.

Ever stoic Coach Sasa Obradovic said after the game: “I cannot say that it was a pleasant match to watch. The most important thing is to have won it. We had a good attitude. We played hard and we did a good job in defence. When you let this team play, they know what to do. They shoot, they are physical…but we were not allowed to play their game in the second half.”

The Roca team returns on 10th March for a match against LDLC Asvel.