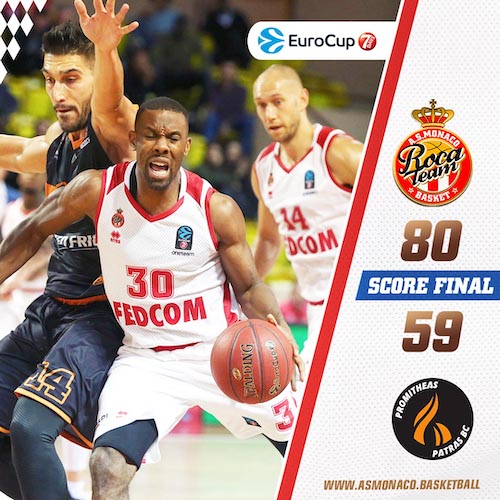 Team Roca came out strong against Greek club Promitheas Patras in the recent EuroCup match with a stunning 80-59 victory at home in Salle Gaston Médecin.

After a two game slide, AS Monaco was ready to rumble from the start. Add into the mix the fact that former NBA star Norris Cole was starting his first game with the Red and Whites on Wednesday 13th November, and the team was positively invigorated.

By the end of the first quarter, the score was 33-6 and Patras’s only points had been made by free throws. The Roca Team wasn’t about to let up, though, and by halftime, the lead was 54-21 with an impressive show by Norris Cole with 5 assists, 4 points and 3 rebounds in the first half. Paul Lacombe found all the openingswhilst Yak Ouattara pierced the target and Will Yeguete and Eric Buckner were everywhere.

In the second half, Monaco wasn’t letting up and kept the lead right up to the end.

AS Monaco Coach Sasa Obradovic was clearly chuffed, giving credit where credit was due and was generous toward their opponent saying , “…the score does not reflect the difference between the two teams.”

Newcomer Cole seems happy in his new home, saying, “The team did a good job, especially in defence, the coach and the players spoke to me a lot. We have found ourselves offensively, especially in transition. My teammates did a great job.”

This is the Roca Team’s fourth win in the EuroCup, putting them within spitting distance of the Top 16.