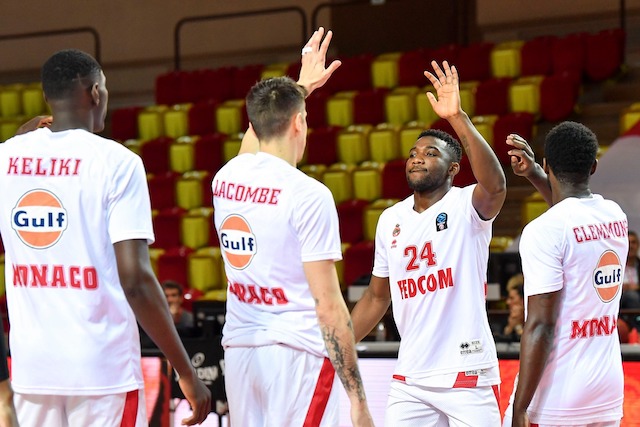 Despite playing to an empty house, the Roca Team had what it took to blow by UNICS Kazan on Wednesday night, securing the top spot in Group G of the EuroCup Top 16, and qualification to the quarter finals.

It must have been a surreal night for AS Monaco Basketball and UNICS Kazan playing at Gaston-Medecin on Wednesday night. Not a single supporter, VIP or even unnecessary staff member were allowed inside to watch the game due to coronavirus restrictions on crowds. Luckily, for fans of both sides, the eerie scene was televised giving them a chance to see all the action.

As winners of Group G, AS Monaco beat out three former EuroCup winners, UNICS Kazan, Rytas Vilnius and Galatasaray. This win sends them to the quarter finals, which begin 17th March.

The Roca Team’s defence set the pace for the evening, keeping them firmly in the lead all night. By the 8thminute in, AS Monaco was ahead 21-9 due primarily to three off-the-charts plays by the dynamic duo of Ouattara and Clemmons. By the end of the first quarter, which was capped off by a brilliant three-pointer by Ouattara, the score was 27-11.

Sasa Obradovic’s players were on fire and made shot after shot. Just before the halftime buzzer, Ouattara made a picture-perfect layup, sending them to the locker rooms with a 44-26 score.

After the break, things weren’t much different. In the end, AS Monaco won with a score of 85-60, sending them onward to the next stages of the EuroCup.

“We played with great intensity, it was important to finish first,” said coach Sasa Obradovic after the match. “The disappointment is that we could not share this historic moment for the club with our supporters. I want to dedicate this victory to our fans.”

The team will be back on Saturday night against Dijon, this time with the fans in attendance.