AS Monaco draws in first game of season

AS Monaco draws in first game of season 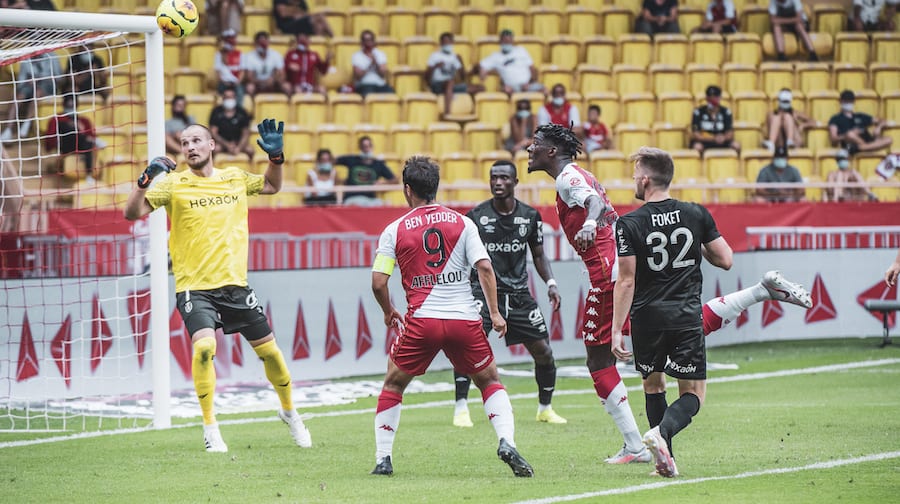 After five months off, AS Monaco returned to Stade Louis II in a hard-fought face off against Stade de Reims ending in a 2-2 draw.
The long anticipated 2020-21 Ligue 1 season has begun and AS Monaco, along with the rest of the league, were raring to go. The Red and Whites returned to the pitch against Reims, the team they battled against in the last game of the aborted 2019-20 season.
Starters for the match were the same as Coach Niko Kovac had in place in the friendly match against Alkmaar, where Monaco won 2-0, and they played in the same 4-3-3 line up.
Unfortunately, the game didn’t start out exactly as hoped. Within the first five minutes of play, Reims’ Boulaye Dia banged one in over the head of Benjamin Lecomte making it a quick 0-1 lead for the opposition.
It wasn’t until about 20 minutes in that the Red and Whites saw their first clear opportunity. Axel Disasi, in his first game with the team, made a clear shot that ultimately bounced off the hand of Thomas Foket, leading nowhere except to a bit of confusion over whether to play on or not. The referee instructed the players to carry on and Reims struck back only a minute later with El Bilal Touré recovering the ball and left-footing it right between the posts.
AS Monaco, clearly on the backfoot, leapt into action. Gelson Martins had three back-to-back attempts on goal in the 29th, 33rd and 37th minutes of the game. None were successful, but the team sprang into action and soon after, another attempt was made by Wissam Ben Yedder.
It was former Reims defender Axel Disani who finally converted for the Red and Whites bringing them to within one goal of their opponents. It was Benoît Badiashile who stepped up in the 55th minute to even up the score. With Monaco maintaining 80% possession of the ball in the second half, Reims barely had a chance to regain the lead, and alas, never did.
After the match, midfielder Youssouf Fofana spoke out about this tough first game of the season saying, “It should be remembered that Reims are not a European team by luck. We were very disappointed that we started the game badly, but after the cooling break we had a very good reaction. The coach has only arrived recently, understanding is being created and this is a good omen.”
Coach Kovac added: “I must admit that I was surprised and shocked because after two goals by the opponents, we were down 2-0. It really was not easy, but in the end I’m happy and proud because the reaction from my team has been very good. We showed that nothing is ever finished after 20 minutes, and we had character. We dominated the game by creating more clear chances, but we must not forget also the decisive save by Benjamin Lecomte. We are on the right track: tactically, technically, we will continue to progress.”