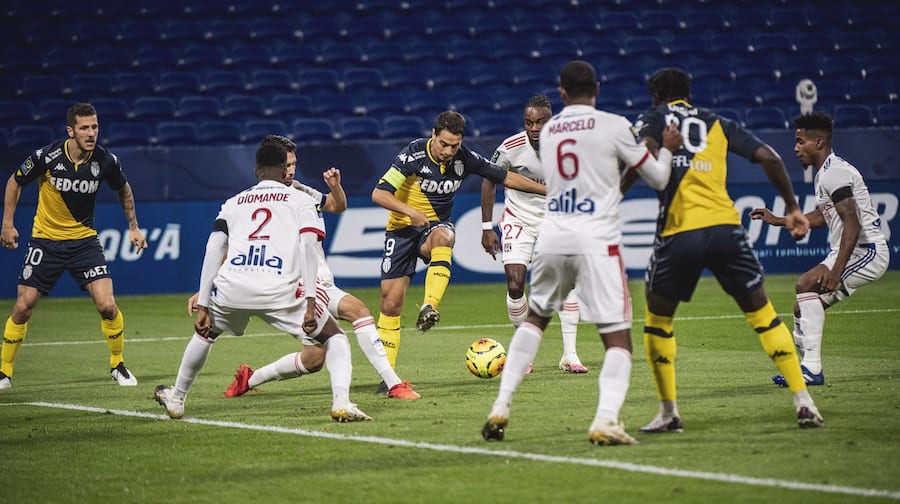 Despite a strong start, AS Monaco wasn’t able to keep the momentum up on Sunday in a tough match against 6th ranked Olympique Lyonnaise, resulting in a 1-4 loss.
Playing on the opponent’s home turf, AS Monaco started the game against Lyon with gusto. They made several shots on goal in the first 15 minutes, but the Lyonnaise goalie, Anthony Lopes, was having a stellar game and his reflexes were sharp as tacks, thus stopping any points from being scored.
Lyon opened the scoring 12 minutes in with a shot by Memphis Depay, marking the first of four goals made in the first half. Lyon’s Karl Toko Ekambi racked up two goals within 10 minutes of each other in the 34th minute and the 44th and Houssem Aouar scored in the 41st. The score sat at 0-4 and things were looking a bit bleak for Monaco as they went into the locker room at halftime.
“They were very dangerous, especially in the first half,” said Monaco Coach Niko Kovac. “We did everything wrong in those first 45 minutes, where we made a lot of bad decisions, starting with me. I am the coach, I chose the team and the tactical system, so I take my share of responsibility for this loss. We weren’t active enough. We were too reactive. We didn’t close down the spaces when needed.”
The second half was a bit better for the Red and Whites, and they were playing well as a team. Wissam Ben Yedder made a fantastic play resulting in a goal in the 48thminute, saving his team from a complete blow-out and breathing some life back into the squad, but sadly not enough for a comeback. The score sat at 1-4 With Lyon taking the day.
“The team as a whole was too passive. I think we need to analyse what happened in that first half,” Coach Kovac reflected.
Monaco drops to 12th in Ligue 1 but have a chance to redeem themselves on Sunday 1st November when they will host Girondins de Bordeaux at Stade Louis II.