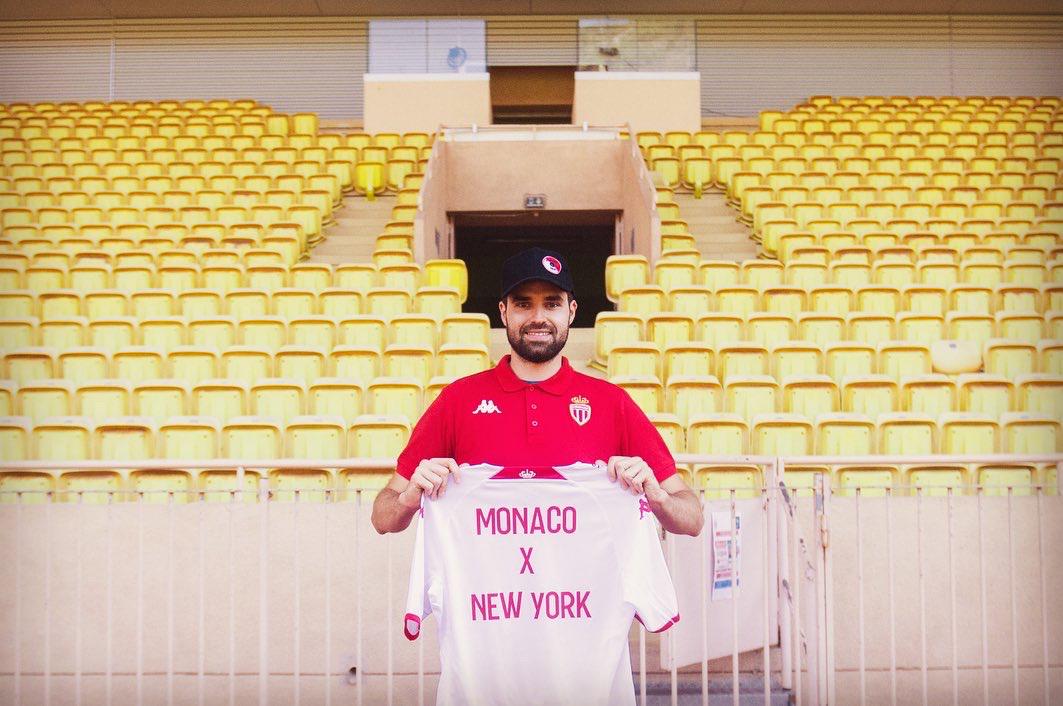 The creation of the latest AS Monaco fan group in New York pushes the boundaries of the club’s slogan, ‘Everywhere, Always’. Monaco Life spoke with its founder, Damien Malatino, to learn more.

Damien Malatino may no longer be living in the Principality, but he isn’t forgetting his Monégasuqe roots – quite the opposite. Now living in New York, where he works as a project manager, Malatino is the founder of the AS Monaco Fans NYC, the Principality’s latest antenne.

Of the 16 fan groups officially registered by the AS Monaco Supporters’ Club, the New York City group is the second most distant from the Principality, after ‘Dom Tom,’ based in Martinique. They are also only the second group outside of France, the other being Liguria Biancorossa, based in Ventimiglia.

Following a meeting with the Supporters’ Club in the Principality during a trip back to the Principality in August, ASM NYC officially became a group in September. The officialisation was announced by the club itself on all its media channels, which according to Malatino, “really helped for visibility.”

“Since the article, we’ve had people contacting us directly saying that they’d seen the article, and asking how they can meet up. Since then, we’ve recruited members and now we can’t wait for the next event,” added Malatino.

The aim of the group is to allow Monaco fans to meet up and share their passion for the Principality club. Prior to the creation of ASM NYC, Malatino frequented the famous ‘Football Factory’ bar located in Manhattan to watch his childhood club in action. Seeing fans of other Ligue 1 gather there to watch the matches, inspired him.

“At the start, I watched matches on my own at a bar where they show all the matches, called The Football Factory. It is well known in New York amongst football fans. There might not be many from Monaco, but there is also a French community and there are fan clubs of other Ligue 1 clubs that I have seen when going to watch Monaco matches. I saw a couple of Monaco-PSG matches for example and I saw that there was a group of Parisian supporters with scarves. I told myself, ‘why not create something to bring together people like me, who are supporters of AS Monaco?” he said.

The idea is not only to facilitate gatherings but also to recruit fans on American soil. “We can meet up to watch the matches and eventually recruit members that like football, but don’t necessarily have a favourite European team. So creating fans and finding sympathisers, that’s how it’s done, and also by bringing together ex-pats,” Malatino told Monaco Life.

Malatino himself was drawn into the game by his father from an early age. Growing up not far from the famous arches of the Stade Louis II in La Condamine, his passion was imparted by his match-going father, whose support for the club pre-dates the creation of the new Louis II.

“The passion came from my family and especially from my dad. He has been a season ticket holder at the Louis II before the new stadium had opened. He is a huge fan of the club, so even when I was young, I remember him taking me to the matches. We watched the matches on the TV as well. My dad did all of the away trips. He took me to watch a few matches when the season ticket holders could bring guests and it was there that my passion started to grow. I went to see matches in Ligue 1. I also watched them play in Ligue 2, where there were some good moments,” he said.

Maintaining a direct link to the Principality

From the 8-3 Champions League victory against Deportivo de la Coruña, Malatino’s first footballing memory, to relegation to Ligue 2, the Monégasque has truly experienced the highs and lows of being a football fan. Having watched Radamel Falcao (his favorite Monaco player alongside Fernando Morientes) in the flesh, the two-time season ticket holder he is now getting used to following his side from distance.

“Thanks to the antenne I maintain a direct link to Monaco. The fact of just being able to share my passion, go to watch the matches, and meet up is something that allows me to keep a link to Monaco. Everyone keeps a bit of a link to their country of origin. We are all there to maintain a link to our country, through football,” he said.

But following European football from the United States is no easy task. The time difference makes watching some games, especially the Europa League ties, which take place mid-afternoon on Thursdays, near-on impossible. Regardless, the goal is to gather twice a month, the next one being this Sunday for the match against Lille.

Malatino admits that the antenne will take years to blossom, he is hoping to slowly build the fanbase in ‘The Big Apple,’ picking up supporters throughout the season as Philippe Clement’s men hunt after another podium finish in Ligue 1.

“We are really making up for our difficult start to the season, which was due to the calendar. Clement has done good work and we are getting back to where we should be in the standings,” said Malatino on Monaco’s start to the season.  “I am very confident that we’ll reach the podium by the end of the season, and I’m hoping that we qualify directly for the Champions League,” he continued.

Whatever the outcome of the current campaign, Clement’s men can count on the support of its newest fan group in New York City, where a Munegu scarf hangs on the wall of the Football Factory symbolising not only the ubiquity of the club but its importance, both at home and abroad.

Photos by AS Monaco