AS Monaco is in the groove!

AS Monaco is in the groove! 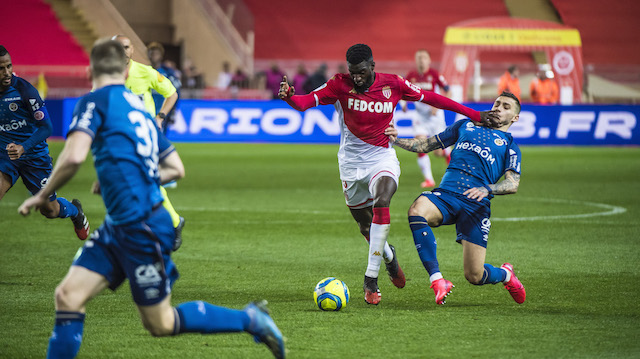 AS Monaco went toe to toe on Saturday night in a home game against Stade de Reims and both sides were in it to win it leaving the score in a 1-1 draw.
The Red and Whites are on a roll with their fifth straight unbeaten match, this time against Stade de Reims. The two teams are  neck and neck in the standings. Monaco sits in seventh place whilst Reims is a hair behind in eighth, having made this evenly matched battle all the more exciting.
The game started with a delay due to a power failure, but once things got started, they moved at lightning speed. Reims came out punching, with Touré and Kamara taking shots on goal in the early minutes. Lecomte handily deflected, but this didn’t deter the out-of towners. Baldé, who was seriously on fire, came at Reims three times but was always thwarted. A Golovin-Ben Yedder one-two almost led to a goal, but this first quarter remained very much a match between goalkeepers.
It wasn’t until a half hour in that the match broke open. Wissam Ben Yedder, on a penalty kick, a made a brilliant shot hard to the left, opening scoring for the game. Not long after, Fofana was perilously close to making it 2-0 but Rajkovic was Johnny on the spot and prevented the goal. Then just before the break, Bakayoko made a powerful shot, but the Reims goalie dove perfectly to block.
After halftime, Reims’ Tasos Donis touched the post, but couldn’t make it happen. Just minutes later Lecomte was forced to intervene on a header by Foket. But this march on Monaco couldn’t be stopped. Around the hour mark, Reims found their goal. Kamara makes a low shot from the corner, surprising the Red and White’s goalkeeper, evening up the game 1-1.
It wasn’t until 15 minutes later that another attempt was made, again by Reims, though this time it went over the posts. With eight minutes to go, Golovin made an excellent shot on goal, but Rajkovic was there to stop him.
Newcomer Aurélien Tchouaméni, playing his first minutes with the club, had a chance from distance in the 86th, but the ball was deflected and hung in the box. Ben Yedder found himself alone in front of goal and collided with Rajkovic. Then Dia failed to beat Lecomte with a big lob.
The game ended in a draw, and a respectable game was played by both sides.
“I think we had a good game. We had many chances”, said Coach Moreno after the match. “We took risks to go for the victory. We are second among all the teams in the league in terms of opportunities to score against them this season. We must not forget that this is the best defence in the championship.”