AS Monaco leaps to 11th after win against Dijon

AS Monaco leaps to 11th after win against Dijon 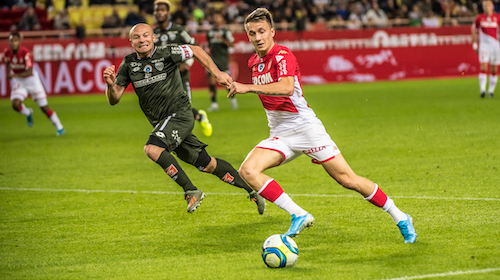 The Red and Whites leapfrogged from 15th to 11th place in Ligue 1 standings after a hard fought win at home against Dijon on Saturday.

Ending on a high before the international break, Monaco beat Dijon in a close 1-0 match at Stade Louis II putting them firmly in the safety zone out of relegation status.

Resolute for a comeback after the disappointing loss to Saint Étienne, the team came out ready to win. The offense was strong from the outset and at the 20th minute, Kamil Glik took a head shot but was blocked by Bafétimbi Gomis. The ball came back to Glik, but he couldn’t convert it to a goal.

Eight minutes later, it was again Gomis who thwarted Monaco’s Benoît Badiashile, followed by a rare missed opportunity by Slimani. Goalie Benjamin Lecomte was made to work for his supper in the 34th and 39th minutes with two attempts by Mounir Chouiar but handled it with aplomb.

Finally, just before the break in the 41st minute, Slimani made a superb pass to Aleksandr Golovin who skilfully scored the only goal of the game.

The second half was a series of back and forth efforts on both sides, with one particular scare for Monaco when Chouiar raced past Glik and nearly evened up the score around the one hour mark. After that, it was Monaco’s game to win and win they did.

Monaco is undefeated against Dijon at home in their last five games and have now won five of their last seven Ligue 1 games, putting their early season rocky start behind them and looking like the contenders fans knew they could be.