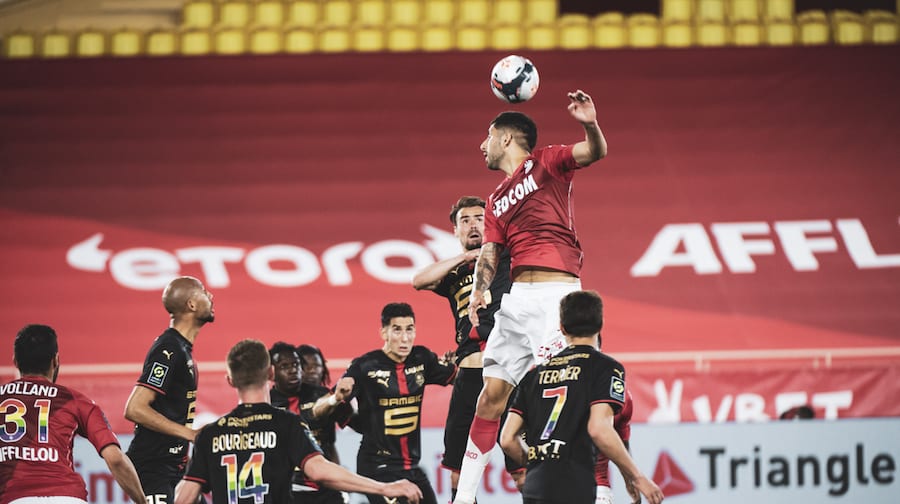 Two first half goals gave AS Monaco the edge they needed to beat Rennes at an away match and hold onto their third place spot in the Ligue 1 standings with only one round remaining.
Playing a crucial match in the fight for the top spots in the Champions League, AS Monaco found themselves up to the challenge against seventh ranked Rennes, winning solidly two to one on Sunday evening.
“It was a tough battle,” said Coach Niko Kovac after the game. “Both teams tried to play positive football but the wind influenced the match a lot. As I said, Rennes are a very good team that is difficult to play against, and who play very good football. I am happy. We managed to take our chances in the first half. I want to congratulate my players, who gave 100%.”
The game started benignly enough. Monaco managed the ball well, but there were no real opportunities until 16 minutes in when Wissam Ben Yedder knocked one between the posts in the corner of the goal, just making it past goalkeeper Alfred Gomis. This shot gave Bed Yedder his 20th goal of the season.
The second goal came in the 29th when Aleksandr Golovin’s attempt from 20 metres away was deflected by Damien Da Silva, where it raced past his own goalie, giving Monaco a two to nil advantage.
The Red and Whites went into the locker room at halftime with a comfortable lead. After the break, Rennes made some fine attempts on goal, but nothing that was a real danger to Benjamin Lecomte, and the score was stabilised.
It was a bit of bad luck that gave Rennes their only goal when Axel Disnai, who had only just come onto the pitch, made an over-enthusiastic header, beating out Lecomte and giving Rennes their only point on the game.
Monaco stayed on top of things after this and the game ended rather uneventfully with Monaco retaining their lead and calling the win for themselves.
Now the Red and Whites have a short three day break before they take on Paris Saint-Germain on Wednesday in the final of the Coupe de France at Stade de France.
Of this, Coach Kovac said, “I want to take things step by step. Until now, we were focused on Rennes. Now we have three days to prepare for PSG. This is the most important match. Only after this match we will talk about Lens. In the final, we will face the best team in France and one of the best in Europe. Before the game, I told my players to savour the moment. Having 77 points and to be fighting for the podium proves the level of our league.”