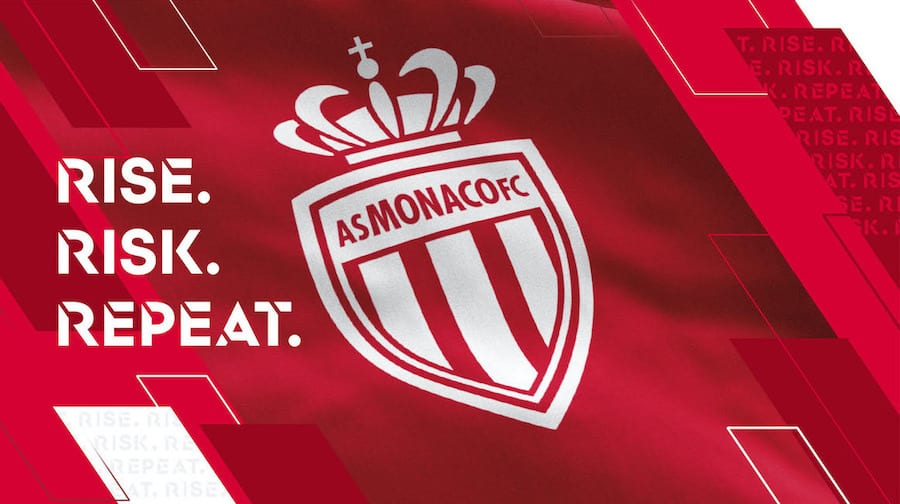 AS Monaco football club have unveiled their new brand, solving the mystery surrounding their odd home page and social media of recent days.
Rise. Risk. Repeat. That is the new slogan for the Red and Whites, accompanied by a brand new look, which is a more modern reworking of the team’s visual image.
All club activities and anything officially tied to the team will now be branded with this new look which features a gradated version of the iconic red diagonal background, punctuated by strong white diagonal strips and the slogan printed boldly in white in three tiers. The crest also got a small make-over, with the gold that once adorned the crown now gone.
The team explains the reason for the update on their website saying, “Over the years, the Monegasque club has established itself as a benchmark by relying on its youth, its audacity and its ability to take up sporting challenges through its European epics and the record of success it has built up. The new brand thus underlines the identity, the history and the view of the future of AS Monaco in the cosmopolitan context of the Principality.”
Each of the three words in the slogan represents an aspect of the team. “Rise” is to celebrate the club’s “fighting and daring spirit”, “risk” speaks for itself, though it also encompasses the team’s willingness to take a chance on developing young talent, and “repeat” emphasises the team’s ability to fight to better themselves, even when the going gets tough.
AS Monaco, the only team in the French Championship to have won at least one title in each of the last six decades, prides itself on being able to bounce back from bad times, always looking to the future whilst still appreciating where they have been.
“Symbolised by the current season, Rise.Risk.Repeat. follows in the footsteps of this new dynamic,” said Oleg Petrov, the team’s Vice-President and CEO. “The club has launched several development projects, such as the Performance Centre, and the past summer we opened a new chapter on the sporting front. The new brand accompanies this desire to move forward, on and off the pitch, by building on what makes AS Monaco inimitable and strong.”
For Sunday’s match against Stade Rennais, the Red and Whites will wear a collector’s jersey featuring the new brand. Some jerseys from the match will be auctioned for the benefit of the Ligue Méditerranée to support local amateur football clubs.
“The new brand is inspired by the club’s main markers to accompany its development and support its ambition,” explained Markus Breglec, Chief Marketing Officer. “Rise.Risk.Repeat. perpetuates the image of AS Monaco: that of a dynamic and modern club, attractive, aware of its heritage and focused on the challenges of tomorrow.”