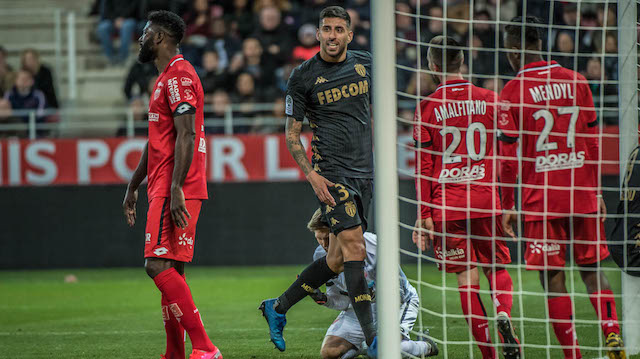 AS Monaco faced a tough Dijon team Saturday night, one who had not conceded a single home game in the last 10.
The Red and Whites showed up at Gaston-Gérard ready to rumble. The last time Monaco went up against Dijon, they played them at home and only just managed to squeak past them for the win with a goal by the currently-suspended Aleksandr Golovin.
Things didn’t begin well as Dijon’s Mounir Chouiar was carted off the field on a stretcher after a massive collision with Benoît Badiashile. About nine minutes in, Monaco launched their first offensive play as Wissam Ben Yedder took a free kick shot on goal but was thwarted. Dijon’s Julio Tavares, not to be outdone, then made two magnificent shots on goal 12 and 18 minutes in, but Lecomte was on it and didn’t let the ball pass.
Monaco, who ultimately had possession of the ball for nearly 60% of the game, played a bit of cat and mouse with Dijon for most of the first half. A Jovetic-Slimani combo was well-played but not enough to make it past Runarsson. It wasn’t until 38 minutes in that things heated up. Dijon’s Mavididi rammed into Lecomte, who scrambled and recovered the loose ball before any damage could be done. Soon after, Slimani, with an assist by Ben Yedder, almost made the grade, but again Runarsson was Johnny-on-the-spot and deflected the goal with his feet.
At halftime, both teams went into the locker rooms goalless.
After the break, things got a bit more interesting. Another Ben Yedder-Slimani set up almost resulted in a goal, but the ball went wide. Moments later, Dijon took advantage and Mama Baldé put one between the posts, opening the scoring for the match at 56 minutes in.
Undeterred, Monaco fought on, and yet again Slimani and Ben Yedder made a set-up, though sadly it wasn’t enough to get past Dijon’s ever-vigilant goalkeeper.
Finally, at 79 minutes in, Monaco seized their chance. Adrien Silva found Slimani, who made a terrific header toward the goal. Runarsson made the block, but the ball fell at the feet of Guillermo Maripan who deftly pushed it through the posts.
Despite it being late in the game, both teams came alive in these last minutes, the most exciting of which was at the 90 minute mark when Tavares had a one-on-one against Lecomte. The goalie made a fantastic save, saving his team from defeat and earning them the draw.
Coach Moreno was proud of his Red and Whites and said after the game: “The team is getting better defensively. We’ve only conceded two goals in four games. We have to work to have even more on executing our chances in front of goal, but I know my forwards have the ability to score.”