AS Monaco “on the right track”

AS Monaco “on the right track” 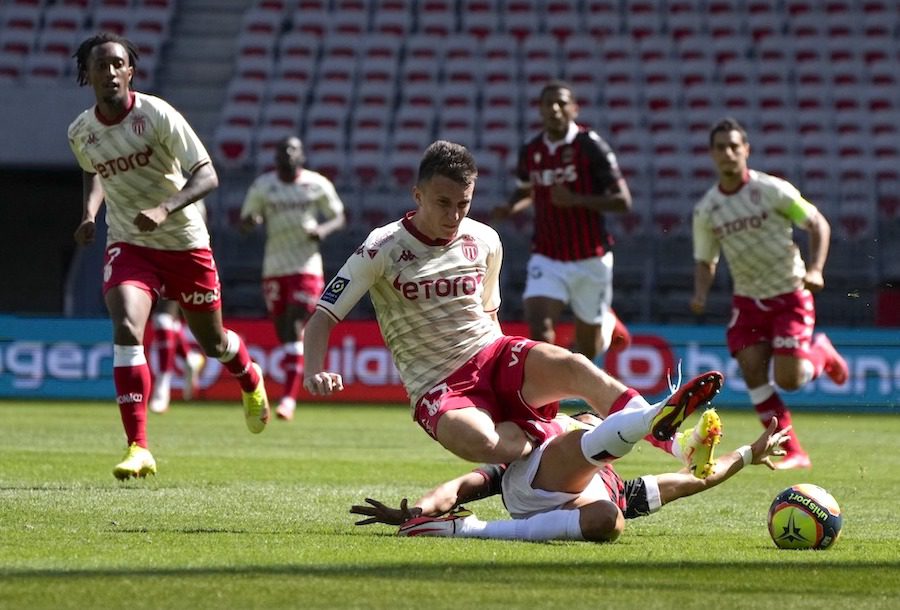 AS Monaco ground out a well-earned draw in a closely-contested, eerily-quiet local derby against OGC Nice. The match, played behind closed-doors at the Allianz Riviera, lacked the atmosphere that usually accompanies such an occasion, but TV viewers were treated to four goals, which ultimately led to the Riviera rivals sharing the points.
Monaco came into the fixture high on confidence following a successful start to their Europa League campaign, having beaten Sturm Graz on Thursday evening. They came up against an in-form Nice side who are so far unbeaten in Ligue 1 this season, and are yet to even concede.
That quickly changed, as in the 39th minute, Aleksandr Golovin tapped in a perfectly-weighted pass across goal from Gelson Martins, becoming the first player to beat Walter Benitez this season.
Nice came out rejuvenated in the second half and quickly equalised through an unmarked Andy Delort, who headed in at the back post. Nice completed the turnaround in the 73rd minute when Hicham Boudaoui neatly slotted in a cut-back from Delort to make it 2-1.
Nice immediately surrendered their advantage as Caoi Henrique was felled by Nice winger Calvin Stengs within the penalty area. Wissam Ben Yedder blasted home the subsequent penalty to restore parity.
Any hopes of a Monaco victory, or even draw, were seemingly dashed moments later as Nice were awarded a controversial, and arguably generous penalty, when Benoît Badiashile was adjudged to have handled within his own penalty area. Despite the ball having undoubtedly struck the Monaco defender’s arm, there was seemingly little that he could have done to evade the ball which was struck hard, and from close-range, from Delort. Monaco will feel that justice was served moments later as Gouiri blasted wide from the spot, and proceeded to rip his shirt open in frustration at the missed opportunity.
The score therefore remained at 2-2, and that is how the 101st installment of the Cote d’Azur derby ended. Nice will ultimately feel disappointed, having been gifted the opportunity to move up to second place in the Ligue 1 table.
Monaco will be buoyed by a positive performance against a strong Nice side and, in addition to a positive result in midweek, it paints a picture of a team moving in the right direction. Speaking post-match, Monaco manager Nico Kovac was pleased with his side’s performance, saying, “We are progressing little by little. Things were progressing against Sturm Graz, today we had some good moments and some not so good moments. I think we are on the right track.”
AS Monaco come up against Saint-Etienne at the Stade Louis II stadium on Wednesday evening, and Kovac will hope that his side can build on their recent uptick in form.