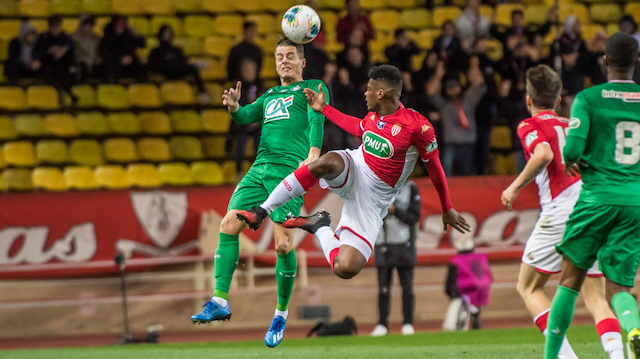 The Red and Whites had a double blow Tuesday night, losing both to St Etienne at home 0-1 and getting knocked out of the final rounds of the Coup de France.

On a blustery night in the Principality, the winds were the only thing that weren’t slow at the outset of the match between AS Monaco and St Etienne.

Despite the brief stoppage of play only five minutes in when Jean-Eudes Aholou, who is on loan to St Etienne from Monaco, pummelled Adrien Silva, who is on loan to Monaco from Leicester City, there wasn’t a lot to see in the first quarter hour of play.

Things started moving though, and Monaco made three consecutive set ups at the 17th, 20th and 23rd minute marks, but were thwarted each time by the Stéphanois defence.

At 25 minutes in, Bouanga caught a pass from Debuchy and slid one in past Lecompte, opening the scoring for the match. The Red and Whites reacted and made a valiant attempt in the 27th when Baldé made a play for the goal, but sadly was not able to convert. Ben Yedder made another try at the 38th, but again, no go.

After the halftime break, Monaco started with a free kick opportunity, but Ben Yedder went wide, and they monopolised the ball for much of the half but were simply unable to get past St Etienne’s Ruffier.

Coach Robert Moreno sees the third loss with his new team, surely not matching the expectations of his bosses after replacing Leonardo Jardim at the midseason break. The Coupe de France may be over for Monaco, but they still have reason to continue the fight. Next Saturday, they play Nîmes for the 22nd matchday of Ligue 1 action.