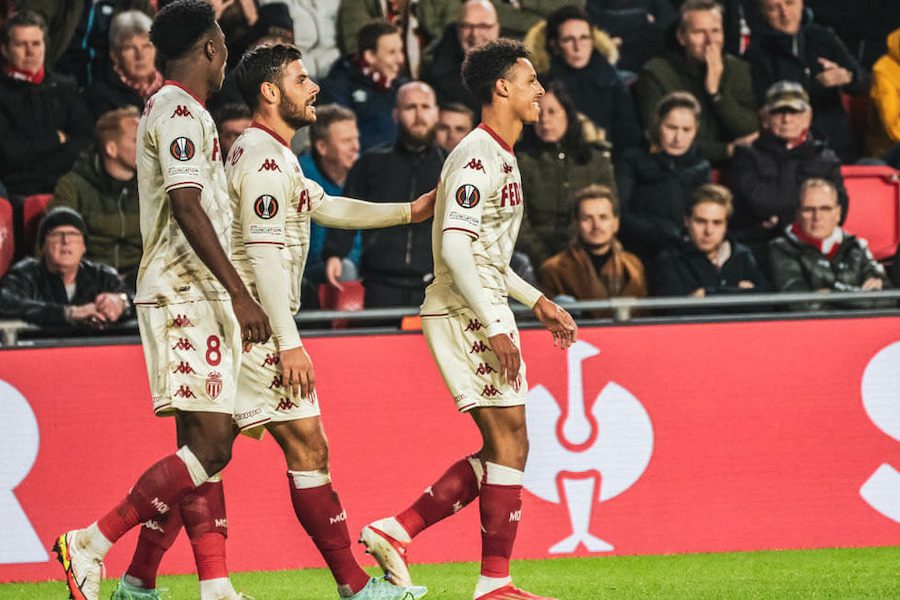 AS Monaco grabbed an unlikely victory in dramatic circumstances against PSV Eindhoven, thanks to a last-gasp winner. Having survived a second-half PSV onslaught at the Philips Stadion, Sofianne Diop was perfectly placed to slot home the winner with only minutes remaining, and secure a valuable three points.
The tie started slowly with neither side capable of mustering even a half-chance. That changed on the 20-minute mark when Ciao Henrique, in a seemingly innocuous position, picked up the ball and floated a perfectly-weighted, defence-splitting ball towards Boadu. The former Eredivisie striker Boadu, without needing to break stride or take a touch, expertly slotted the ball through Drommel’s legs to open the scoring.
AS Monaco proceeded to dominate the remainder of the half, and would have been disappointed not to have gone into half-time further ahead. Boadu, having already opened his account for the night, twice dithered on the ball, allowing defenders to get back and make goal-saving challenges when he had been played through on goal.
A reinvigorated PSV, unrecognisable to the side that had been so passive in the first-half, sought to make ASM rue their missed chances early in the second. Nübel was forced into a string of fine saves early on, the most notable of which coming from a fierce Vinicius strike, which seemed destined for the bottom corner.
The warning signs were not heeded, and PSV’s incessant pressure paid off in the 59th minute – Gakpo rifling in a long-distance strike that seemingly beat Nübel for pace to level the score.
PSV, not satisfied with the point, continued their bombardment of the ASM goal, and should have converted one of their high-quality chances. The most gilt-edged chance fell to the substitute Vertessen, who blazed high and wide when unpressured only a few yards out.
Going into the closing stages, ASM would have been happy to share the points, having been under the cosh for the entire second-half. It was however ASM, who secured an unlikely victory, against the run of play. Ciao Henrique was once again the provider, flashing a ball across the face of goal for Diop to tuck-in and take all 3 points.
The 2-1 win in Eindhoven is enough to keep Nico Kovac’s top of their Europa League group, and firmly on course for qualification for the group stages.
Post-match, Nico Kovac admitted that he thought his side were lucky to come away with the win. “In the second-half, we had more problems because we didn’t play the way we had in the first-half, we were too passive and that is why we were under pressure… we are a bit lucky to win this match, but to be honest, I’ll happily take the 3 points.”
ASM have a tight turnaround, as they host Montpellier on Sunday afternoon.