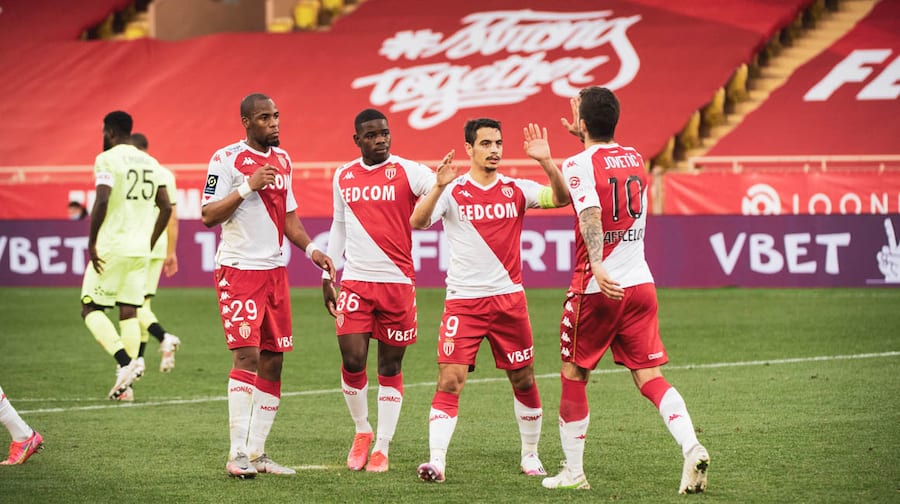 With double trouble coming from Wissam Ben Yedder and a third goal for good measure from Stevan Jovetić, AS Monaco are now a single point from second place Paris Saint-Germain in Ligue 1 action.
The Red and Whites have kept their third place position in Ligue 1, one point ahead of Lyon and one behind PSG, after their three to nil victory over Dijon on Sunday at Stade Louis II.
The match was hardly a forgone conclusion as the Monaco side played a rather sloppy first half, finding it difficult to take many opportunities against a strong Dijon defence. It looked like Guillermo Maripán was going to open scoring at 24 minutes in from an assist by Aleksandr Golovin, only to have it disappointingly called offside. Then a few minutes later, there was hope that Stevan Jovetić would make the grade, but he was blocked by Dijon’s excellent goalkeeper, Saturnin Allagbe.
Despite having 65% possession of the ball, the Dijon team gave them few chances to convert in the whole first half.
After the break, things got far more interesting. Jovetić, who had a fantastic night, opened scoring at the 50 minute mark, scoring his fifth goal this season. This opened the flood gates and soon after, Caio Henrique made an attempt on goal that wasn’t a success but was good for keeping momentum going.
Maripán had another thwarted attempt at the 57-minute mark, but the team were rewarded five minutes later as Wissam Ben Yedder doubled the score for Monaco. This was followed a quarter of an hour later as Ben Yedder converted again at the 90-minute mark from a penalty shot, giving him his 17th goal of this season.
“It is true that the first half was difficult as Dijon defended well with a low block. We had few chances,” said Coach Niko Kovac. “In the second half, we were able to come back and score quickly thanks to a penalty, and we obtained many more chances. The victory was deserved.”
Monaco face off against Bordeaux next Sunday at the Stade Matmut-Atlantique where fans will see if they can keep the magic going.