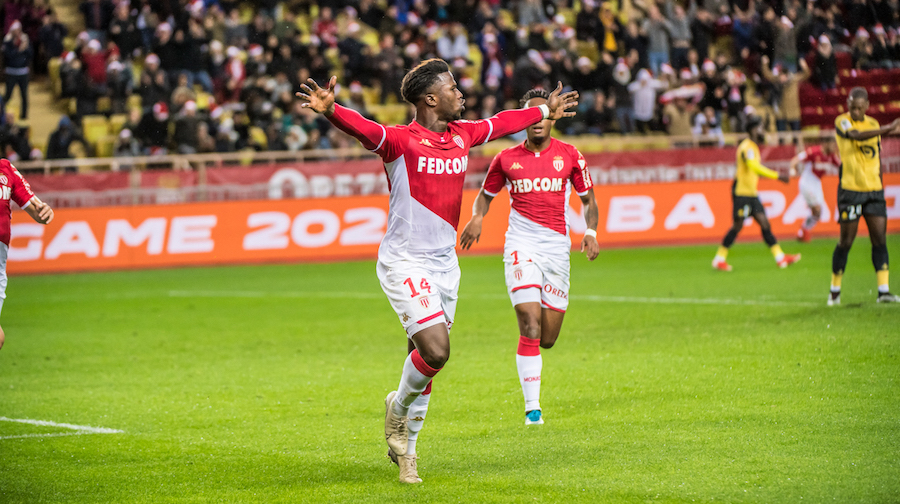 AS Monaco ended the year with a veritable festival of goals against Lille and a fourth match undefeated in Ligue 1, giving them solid hopes for the return phase in January.

Despite a convincing start, the Red and Whites found themselves behind in the 13th minute, when Ikoné played in Osimhen who beat Lecomte to open the score. But AS Monaco reacted quickly. In the 23rd minute Ben Yedder intercepted a Lille pass in the middle of the field and found Gelson in the right of the area. The Portuguese did not hesitate against Maignan and equalised with force.

Having held their ground well up to this point, LOSC began to crumble and AS Monaco quickly took advantage. Just before the half hour of play, Aguilar ran up the right wing after a good pass from Gelson. His cross found Baldé’s head but left Maignan no chance of firing the ball under the bar. The Red and Whites reversed the score and did not stop there, despite excellent work from Lecomte at the end of the first period to repel two shots from Osimhen and Bamba.

On returning from the locker room, LOSC tried to react but were picked off a third time in the 52nd minute. Aguilar was once again at the heart of it with a perfect cross for Baldé, whose header was this time saved by Maignan. Ever opportunistic, Ben Yedder followed up and smacked the ball into the goal. AS Monaco made their breakthrough and went on to secure the match in the 64th minute. Gelson managed to reach Golovin, who was defended by Fonte but passed the ball to Aguilar who was in good position facing the Lille goal. Altruistic, as always, set up Ben Yedder for his double, achieving the fourth Monaco goal.

Far from being satisfied, the Red and Whites drove the point home at the very end of the match. Despite a penalty denied in the 77th minute following a handball from Gabriel, it was on a free kick that the fifth goal came in overtime. From the left side, Golovin put the ball in to the far post, where Glik threw himself at the ball and scored the last ASM goal of 2019.

With a final score of 5-1 and fourth game undefeated, AS Monaco has solid hopes for the return phase, which kicks off on 11th January against PSG at the Parc des Princes.